These hospital mark-ups translate directly into higher drug spending—regardless of how manufacturers set list prices. Using some fairly conservative assumptions about Remicade, I show below how hospitals are earning thousands of dollars more than the drug’s manufacturer does.

Meanwhile, health plans are struggling to shift patients from hospital outpatient settings to physician offices—where costs are lower, at least until those sites are acquired by hospitals.

I suppose that the charts below should be troubling to hospital-based physicians, who can barely control their righteous indignation over drug prices. Alas, it’s always easier to blame pharma companies than to admit that their own hospital employers are driving up healthcare costs.

Physician offices and hospital outpatient clinics are the primary sites of administration for such provider-administered drugs as biologicals, injectables, IVIG, immunoglobulins, and other products. For 2015, these two types of sites accounted for nearly all of medical pharmacy benefit spending for commercial payers and Medicare. (See page 37 of the report.) The remaining spend occurred primarily via home infusion/specialty pharmacy, which had a higher share in certain product categories.

Oncology drugs and related support products are the largest share of spend, accounting for 47% of commercial medical benefit spending and 57% of Medicare spending. (See page 7 of the report.) No other therapy category amounted to more than 11% of spending.

IF YOU CAN GET AWAY WITH IT

Most provider-administered outpatient drugs are governed by the buy-and-bill process, which is illustrated in Follow the Vial: The Buy-and-Bill System for Distribution and Reimbursement of Provider-Administered Outpatient Drugs.

Consequently, Medicare reimbursement in both physician offices and hospital outpatient settings is based on ASP. The Magellan data show that for 2015, actual costs per claims and per unit were comparable across different care settings. That’s because Medicare does not generally permit large variations between different sites of care for drug reimbursement.

However, the Magellan survey data reveal that commercial payers have very different reimbursement methodologies for the two types of administration sites: 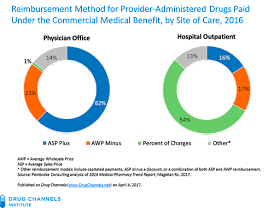 In each case, the hospitals received thousands of dollars more than the physicians’ offices. For commercial payers, hospitals’ percent-of-charges approach allows them to be paid about twice as much as physician offices. 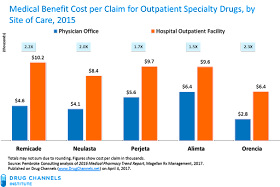 This effect was due primarily to differences in cost per unit, not due to differences in patient mix or treatment intensity. For example, the average cost per unit of Remicade administered in a physician office was $89. But the average cost of Remicade administered in a hospital outpatient setting was $233—more than 260% higher!

Note that the chart above refers only to the provider’s revenues. About half of all hospital purchases are now made at sharply discounted prices via the 340B Drug Pricing Program. (See 340B Purchases Hit $12 Billion in 2015—and Almost Half of the Hospital Market.) The 340B pricing can create incredible hospital profit margins from commercial payers.

Hospitals can even earn more than the drug’s manufacturer, due to the extreme mark-ups combined with discounted 340B acquisition costs.

Consider Remicade, which accounted for 11% of 2015 commercial medical benefit spending. In the table below, I use the Magellan report’s data to estimate profits for a physician office compared with a 340B hospital outpatient setting. For simplicity, I assume that (1) a provider’s acquisition cost is equal to the publically-reported ASP for Remicade, and (2) a 340B covered entity can acquire the product at a 35% discount to the ASP. 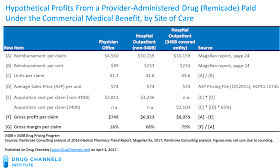 As you can see, the physician office earns a gross profit per claim of $748, equal to a 16% margin. The hospital, however, earns a gross profit of $6,923 and a margin of 68%. If the hospital is able to acquire the product at the discounted 340B price, the margin becomes $8,055 (79%). That’s more than four times as much as the drug manufacturer received for the same product!

As long as such financial windfalls prevail, hospitals will be slow to adopt biosimilar drugs. See the discussion in Section 6.3.4. of our 2016-17 wholesaler report.

A key implication of the Magellan data is that drug costs increase when care is shifted from physician offices to hospitals. Unfortunately, the administration of chemotherapy infusion has shifted dramatically from lower-cost physician offices to higher-cost hospital outpatient settings. (See The Decline and Fall of Physician Buy-and-Bill For Specialty Drugs.) That’s bad for healthcare spending.

More than 8 out of 10 health plans identified “moving infusions to the lowest cost sites of care” as a high priority for 2017 and 2018. But third-party payers have had limited success in shifting care to lower-cost settings. They cite “managing infusion sites of care” and “managing oncology” as their two least successful efforts. See Health Plans Are Confused about Specialty Drug Management.

I’VE GOT THE PROFITEERING BLUES

The image for this post comes from this long-forgotten song from 1920. I learn so many fun facts researching Drug Channels!

To all readers under the age of 25: The music in the video is coming from something called a "record player." That’s how we streamed music back in the olden days. Click here if you can’t see the video.