Back in November, I told The Wall Street Journal: “Walgreens is trying to be the best friend of every PBM that’s not named Caremark.” These latest results show that this aggressive partnering is paying off for its pharmacy business—although its front-end growth was weak and per-prescription profits appear to be down.

Read on for more details—and expect a competitive reaction.

As always, I encourage you to read the original source material for yourself. Here are direct links to the information about Walgreens Boots Alliance’s second fiscal quarter of 2017:
ALGEBRAIC!

The chart below shows year-over-year change in same-store prescription count at CVS Health’s retail pharmacies, Rite Aid, and Walgreen Boots Alliance’s U.S. retail pharmacy business. These data reflect year-over-year changes in drugstores that have been open for at least 12 consecutive months. The figures express the number of prescriptions dispensed, which means that the numbers are unaffected by price changes from brand-to-generic substitution. This chart updates the data in Exhibit 34 of our 2017 Economic Report on U.S. Pharmacies and Pharmacy Benefit Managers. 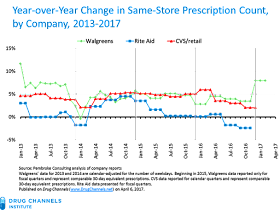 For 2016, CVS and Walgreens had comparable same-store prescription growth rates, averaging about 4%. Results at CVS, however, trended downward during 2016. Rite Aid’s prescription growth lagged that of the other companies and was negative for much of 2016.

But for the three months ending February 28, 2017, same-store prescriptions at Walgreens grew by 7.9%. I'll be surprised if CVS or Rite Aid match that figure for early 2017.

On the earnings call, WBA EVP and global CFO George Fairweather stated that the uptick in prescription activity "was primarily due to strong volume growth from Medicare Part D and strategic pharmacy partnerships which we announced last year."

He was referring to WBA's many deals with PBMs for commercial and Medicare Part D business. Here are some Drug Channels analyses to get you caught up on the most significant deals:
For a primer on the economics of narrow networks, see Chapters 7 and 10 of our 2017 pharmacy and PBM report.

In the meantime, you can figure out which Adventure Time character you are.