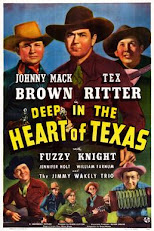 Over the weekend, the U.S. Senate passed a massive overhaul of the Medicare Part D program. If passed into law, these changes will have many unintended consequences, but will not address the warped incentives baked into our current rebate system.

This makes it a good time to review the murky, little-seen economics of how commercial plan sponsors and payers access the billions of dollars in manufacturer rebates and fee that are negotiated by their pharmacy benefit managers (PBMs).

Our analyses of new Texas-mandated PBM disclosures reveal that plan sponsors receive most of the rebates, fees, and other payments from manufacturers. However, PBMs retain an unexpectedly large share of these payments—while the patients whose prescriptions generated these funds get almost nothing.

In other words, plans spread around manufacturers’ rebates and fees to offset premiums for all beneficiaries, rather than lower out-of-pocket costs for drugs that plans buy at a discounted price. Perhaps Congress will someday get around to corralling these funds.

THE REBATES AT NIGHT

Over the past five years, there has been a spike in state legislation targeting various aspects of the U.S. drug channel and its participants. Many states have passed laws that require manufacturers, PBMs, and/or others to submit certain information to states. The laws vary, but they include reporting of such items as drug prices, gross spending, net spending, and/or rebates. I highlight this trend in Section 12.3.3. of our 2022 Economic Report on U.S. Pharmacies and Pharmacy Benefit Managers.

A surprising number of laws require the reporting of drugs’ wholesale acquisition cost (WAC) list prices. Just a thought: Rather than building a new state bureaucracy, those states’ taxpayers would have been better off with a subscription to the data readily available from multiple publishers of drug pricing metric benchmarks.

Some states have more helpfully attempted to provide transparency into data that are not otherwise publicly available. Alas, many of these laws have ended being useless, because they are either poorly drafted or lack enforcement mechanisms.

Consider the reporting required by Nevada Senate Bill 539. The bill stipulates that the Nevada Department of Health and Human Services (DHHS) compile and publish certain information regarding “prescription drugs essential for treating diabetes” in the state. For 2017, PBMs reported $1.8 billion in negotiated commercial rebates in Nevada. But for 2020, PBMs reported only $21.8 million in negotiated rebates—an implausible 99% decline in rebates for diabetes products. When I emailed Nevada's DHHS to ask why rebates plummeted, they just shrugged (via email) and said they have no way to validate or audit anything. Oh well.

To its credit, Texas has somehow compelled widespread compliance with its Insurance Code Section 1369.502, which requires PBMs to file annual reports on rebates, fees, and other payments. You can find information about the program on this Texas Department of Insurance website: Pharmaceutical benefits reporting.

Under the Texas code, PBMs are required to report the “aggregated rebates, fees, price protection payments, and any other payments collected from pharmaceutical drug manufacturers” and the breakdown of these payments into three mutually exclusive categories: DEEP IN THE HEART OF TEXAS

Despite these variations, the data tell a compelling and fairly consistent tale about what happened to the manufacturers' payments to PBMs. 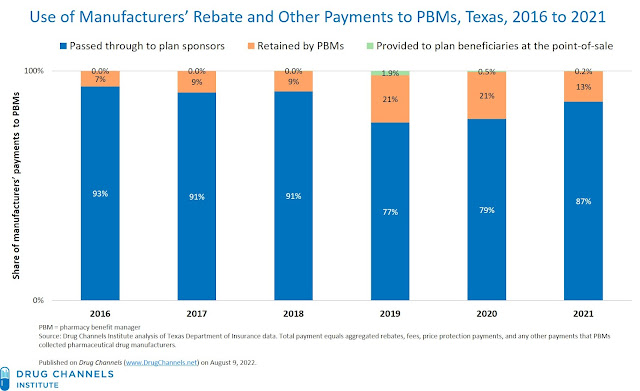 Different plan sponsors have varying preferences for how the value of rebates is reflected in their pharmacy benefit spending. But the Texas data show that there have been few new developments in plan sponsors’ usage of manufacturers’ rebates.

Perhaps that’s why the PBMs cry, “Ki-yip-pee-yi,” deep in the heart of Texas.