This week, I’m rerunning some popular posts while I prepare for this Friday’s live video webinar: Specialty Drugs Update: Trends, Controversies, and Outlook . 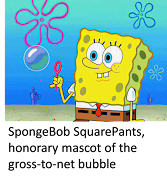 Time for Drug Channels Institute’s annual update on the gross-to-net bubble—the ever-growing dollar gap between sales at brand-name drugs' list prices and their sales at net prices after rebates and other reductions.

We estimate that the gross-to-net bubble reached $204 billion for patent-protected brand-name drugs in 2021. If we include brand-name drugs that have lost patent protection and face competition from generic equivalents, the bubble was even higher, at $236 billion.

Pharmaceuticals are the only part of the U.S. healthcare system in which the difference between list and net prices is monetized as rebates and redistributed via intermediaries to payers. This bubble reflects—and drives—both patients’ affordability problems, intermediaries' warped incentives, and politicians’ misunderstandings of U.S. drug prices.

Read on for our latest data—and a reminder why SpongeBob SquarePants remains a fixture on Drug Channels.

Today’s post is adapted from Section 9.2. of our just-released 2022 Economic Report on U.S. Pharmacies and Pharmacy Benefit Managers.

The manufacturer of a drug establishes the drug’s list price, called the Wholesale Acquisition Cost (WAC). A pharmacy’s revenues for a brand-name drug prescription approximate the list price, due to the typical formulas used to compute ingredient cost reimbursement.

A drug’s net price equals the actual revenues that a manufacturer earns from a drug. The net price equals its list price minus rebates and such other reductions as distribution fees, product returns, discounts to hospitals, price reductions from the 340B Drug Pricing Program, and other purchase discounts. Negotiated and statutory rebates described in the preceding section, however, are the largest and most significant components of gross-to-net price differences. Below, we outline the major components of these gross-to-net price differences for brand-name drugs.

Consequently, brand-name manufacturers earn substantially less revenue than drug list prices imply, due to the gross-to-net difference between a manufacturer’s list and net prices. That’s also why net drug prices are declining even as list prices grow. See Tales of the Unsurprised: Brand-Name Drug Prices Fell for the Fourth Consecutive Year. I’ll update the 2021 manufacturer-specific data in an upcoming post.

2. What is the gross-to-net bubble?

Our terminology has been embraced by industry participants, the government, and others who cover the industry. The Medicare Payment Advisory Commission (MedPAC) even used the term in a 2019 Report to the Congress.

Click here to read all Drug Channels articles on the bubble.

We also own the super cool domain name www.GrossToNetBubble.com, which redirects to our most recent article on the bubble’s size.

3. What does this have to do with SpongeBob SquarePants?

One of SpongeBob’s favorite pastimes is “blowing soap bubbles into elaborate shapes.”

Hence, Mr. SquarePants is the honorary mascot of the gross-to-net bubble and appears on Drug Channels whenever we discuss the topic. He also graces the set of the Drug Channels Video studio.

Through the compounding effect of gross-to-net pricing differences, the total value of manufacturers’ off-invoice discounts, rebates, and other price concessions for patent-protected brand-name drugs continues to expand. We estimate that in 2021, the total value of gross-to-net reductions for patent-protected brand-name drugs was $204 billion. 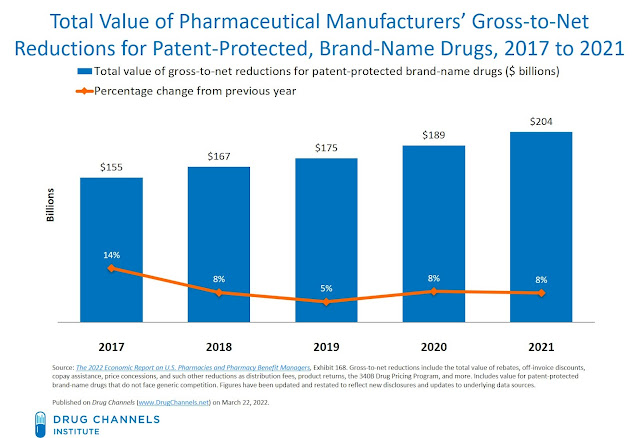 The chart below, which appears as Exhibit 169 in our 2022 pharmacy/PBM report, summarizes our estimates of the major components of the gross-to-net bubble for brand-name drugs in 2021. We estimate that a majority of total gross-to-net reductions for these products come from rebates paid to third-party payers. Note that the total value of gross-to-net reductions exceeds the figure above, due to the inclusion of brand-name drugs that have lost patent protection and face competition from generic equivalents. 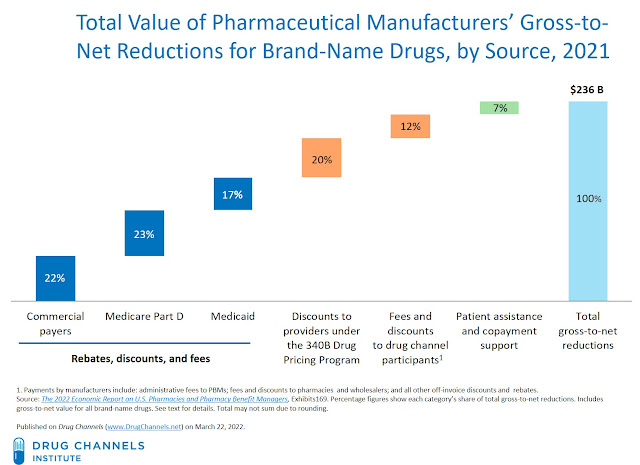 Here are some of the most pernicious problems:
In Section 9.3.3. of our 2022 pharmacy/PBM report, I outline other ways in which the gross-to-net bubble disrupts proper functioning of the marketplace. Despite these issues, it seems unlikely that benefit designs deemphasizing rebates will be adopted anytime soon.