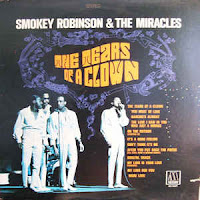 Below, you’ll find my highlights of the report’s findings on prescription coverage. I summarize employers’ 2019 pharmacy benefits by examining (1) cost sharing tier structures, (2) the prevalence of copayment vs. coinsurance, and (3) average copayments and coinsurance rates, by formulary tier. I break down the 2019 results for plans with and without high deductibles.

Employer benefit designs increasingly expose patients to the list price of their prescriptions. This is due largely to the benefit designs described below, which have shifted out-of-pocket spending for prescription drugs from copayments toward deductible and coinsurance spending. As you will see, cost sharing for prescription drugs in high-deductible plans differs significantly from that of plans that lack high deductibles. Plans with no limit on out-of-pocket expenses remain distressingly common.

Patients are finding their benefits to be increasingly mysterious, with more tiers, more coinsurance, and greater use of deductibles. When people complain about “drug prices,” they are actually complaining about the share of costs that they pay—and how those costs are computed. Put another way, the plan details won’t give employees a glad expression.

Read on for my analysis along with our annual Drug Channels tiers/tears puns.

The Kaiser Family Foundation conducts an annual survey of employer-sponsored health benefits. The 2019 report tracks benefits at more than 2,000 companies. More than 70% of responding firms for the 2019 report participated in either the 2017 or 2018 surveys, or both. Click here for the full methodology.

For 2019, 30% of employees were enrolled in High-Deductible Health Plans with a Savings Option (HDHP/SOs). The Kaiser survey defines HDHP/SOs as having a deductible of at least $1,000 for single coverage and $2,000 for family coverage, and also offering either a Health Reimbursement Arrangement (HRA) or a Health Savings Account (HSA). Below, we compare benefit designs and cost sharing in HDHP/SOs with plans that lack high deductibles. Plans that lack significant deductibles include health maintenance organizations (HMOs), preferred provider organizations (PPOs), and point-of-service (POS) plans.

For consumers with third-party pharmacy benefit insurance, the share of a prescription’s cost is usually linked to benefit cost tiers—categories that define a plan member’s copayment or coinsurance. In general, prescription drug plans financially reward patients for using generic and lower-tier drugs. They require the patient to pay progressively higher copayments or coinsurance for drugs on higher tiers.

For more background on pharmacy benefits and comparisons between payers, see chapters 5 and 6 of our 2019 Economic Report on U.S. Pharmacies and Pharmacy Benefit Managers.

Here are the Kaiser survey’s updated definitions for common terms used in its report and the charts below:
Note that I reproduced the definitions exactly as they appear in the report.

For HDHP/SOs, however, three-tier plans are the most common, accounting for nearly half (49%) of enrollment. However, 10% of employees in high-deductible plans are in plans in which cost sharing is the same regardless of drug type. What’s more, 9% of employees have no cost-sharing after the deductible is met. Only 3% of employees in traditional plans face either of these tiers. 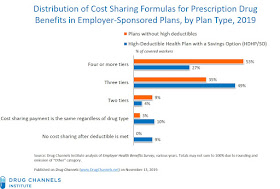 Below, we compare cost sharing for prescription drugs in HDHPs/SOs with plans that lack high deductibles.

The chart below shows the utilization of copayment vs. coinsurance in employer-sponsored plans without a high deductible. Some notable changes compared with last year’s figures: 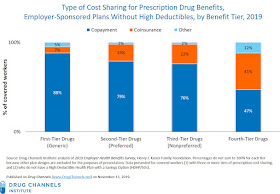 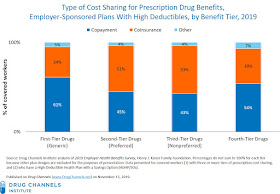 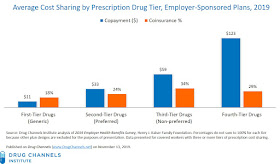 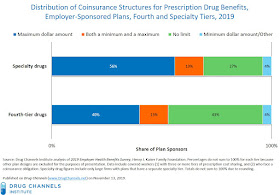 QUITE A DIFFERENT SUBJECT

Unfortunately, employer benefit designs for 2019 continue to expose patients to the problems of the gross-to-net bubble.

Many people with employer-sponsored insurance face out-of-pocket costs linked to prescription list prices regardless of the actual net, post-rebate costs. That’s because coinsurance percentages are computed based on the price negotiated between the pharmacy and the plan or PBM. These negotiated prices are typically close to list prices. Even worse, patients pay the entire negotiated price when they are within a deductible. See the follow-the-dollar prescription math in How Health Plans Profit—and Patients Lose—From Highly-Rebated Brand-Name Drugs.

Consequently, patients with these benefit designs do not benefit from rebates, though major brand-name drug makers sell their products at half of the list prices. See Half-Off Sale! Five Major Drugmakers Reveal Vast Gross-to-Net Price Gaps—and Why Rebate Reform Is Still Needed.

The disappearance of two- and three-tier benefit designs has made out-of-pocket expenses especially significant for specialty drugs. Plans place therapies for such chronic, complex illnesses as cancer, rheumatoid arthritis, multiple sclerosis, and HIV on the fourth and specialty tiers of benefit plans.

Here’s a prescient video from Smokey Robinson & The Miracles, who sing about the emergence of managed care and pharmacy benefits. Click here if you can’t see the video.