Walgreens, CVS, and Walmart Lead the 25,000 Pharmacies Now Profiting From the 340B Program 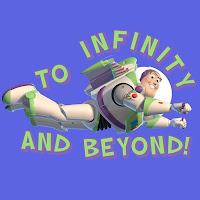 It’s time for our annual look at the booming pharmacy component of the 340B Drug Pricing Program. Our latest, exclusive analysis finds that:
Clearly, multi-billion-dollar, for-profit, publicly traded pharmacy chains are benefiting from the 340B discounts intended for covered entities. Below, I offer some policy suggestions so that we can better understand what's going on here.

In upcoming articles, I’ll examine pharmacy benefit manager (PBM) and specialty pharmacy participation in 340B and explain the oversize profits that pharmacies can earn from the program.

For now, you should ponder how and why the 340B program continues its unbridled takeover of the pharmacy industry...and beyond.

The contract pharmacy process is complex and sometimes confusing. For more details, see Section 11.5 of our 2019 Economic Report on U.S. Pharmacies and Pharmacy Benefit Managers.

The 340B program has grown to account for 7% to 8% of the total U.S. drug market. According to data provided to Drug Channels by HRSA, discounted purchases made under the program via Apexus, the HRSA-designated Prime Vendor, totaled $24.7 billion in 2018. What’s more, purchases under the program have grown at an average rate of 28% per year since 2014. Details here: 340B Program Purchases Reach $24.3 Billion—7%+ of the Pharma Market—As Hospitals’ Charity Care Flatlines.

To profile the 340B contract pharmacy market, Drug Channels Institute examined HRSA’s Contract Pharmacy Daily Report, as published on July 1, 2019. We screened out all contracts that had been terminated before that date. Using our proprietary database, we classified all contract pharmacy locations by parent organization. Most chains are listed with multiple alternate names. 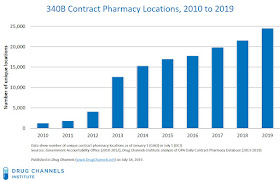 Three large retail chains account for a majority of 340B contract pharmacy locations. These companies are among the largest U.S. pharmacies. 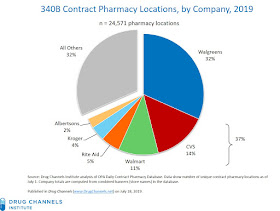 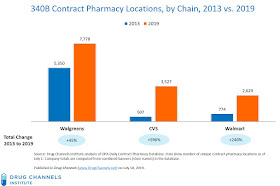 I remain puzzled as to why Congress has shown so little interest in addressing this growth.

A 2018 GAO report explained how pharmacies profit by trading third-party prescription margins for a share of the 340B discounts earned by covered entities. These profits can come at the expense of low-income, uninsured patients. See GAO Confirms It: 340B Hospitals and Contract Pharmacies Profit from Low-Income, Uninsured Patients.

In my testimony to the National Commission on 340B, I put forward commonsense policy recommendations to heighten accountability and transparency for contract pharmacies:
Our latest data analysis shows that the 340B program continues its unchecked expansion. It’s time for Congress to make sure that the 340B program does not enrich billion-dollar pharmacies at the expense of needy patients.