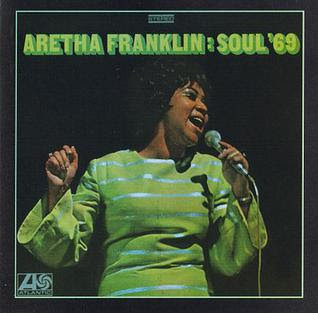 It’s time for a deep dive into the 2018 Kaiser Family Foundation Employer Health Benefits Survey, which you can read online for free. The survey provides valuable national benchmarking for employer-sponsored health coverage in 2018.

If you’d rather not to wade through the entire report, please enjoy my highlights on prescription coverage below. I summarize employers’ 2018 pharmacy benefits by examining (1) cost sharing tier structures, (2) prevalence of copayment vs. coinsurance, and (3) average copayments and coinsurance rates, by formulary tier. I breakdown the 2018 results for plans with and without high deductibles.

For 2018, employers continue to increase cost-shifting for specialty drugs. Most plans have four or more tiers. Economically debilitating coinsurance—in some cases with no limit on out-of-pocket expenses—remains distressingly common. Many people with employer-sponsored insurance are being exposed to prescription list prices, regardless of the actual net, post-rebate costs.

In a follow-up article, I’ll provide thoughts on what employers’ benefit designs mean for patient affordability, out-of-pocket costs, and perceptions of prescriptions prices. Spoiler: Patients won’t be looking like they are having fun.

TAKE A GOOD LOOK AT MY … SAMPLE

The Kaiser Family Foundation conducts an annual survey of employer-sponsored health benefits. The 2018 report tracks health benefits at 2,160 firms. More than 70% of the responding firms participated in either the 2016 or 2017 surveys, or both. Click here for the full methodology.

YOU KNOW MY COSTS LOOK OUT OF PLACE

For consumers with third-party pharmacy benefit insurance, their share of a prescription’s cost is usually linked to benefit cost tiers—categories that define a plan member’s copayment or coinsurance. In general, prescription drug plans financially reward patients for using generic and lower-tier drugs. They require the patient to pay progressively higher copayments or coinsurance for drugs on higher tiers. Allowing the beneficiary to pay less out of pocket for generic drugs, for example, supports the substitution of therapeutically equivalent generic drugs for brand-name drugs.

For more background on pharmacy benefits and comparisons between payers, see Chapters 5 and 6 of our 2018 Economic Report on U.S. Pharmacies and Pharmacy Benefit Managers.

Here are the Kaiser survey’s updated definitions for common terms used in its report and the charts below:
Note that I reproduced the definitions exactly as they appear in the report.

IF YOU LOOK CLOSER IT'S EASY TO TRACE 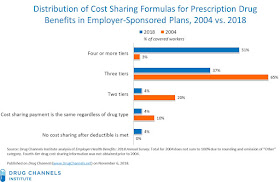 In the employer data shown above, a small percentage of plans (4%) have the same cost sharing regardless of drug type (excluding specialty drugs). Among these workers, 8% have copayments and 92% have coinsurance. The average coinsurance rate is 20%.

In addition to an increase in the number of tiers, enrollment in High-Deductible Health Plans with a Savings Option (HDHP/SOs) is growing. The Kaiser survey defines HDHP/SOs to be plans that have a deductible of at least $1,000 for single coverage and $2,000 for family coverage and that also offer either a Health Reimbursement Arrangement (HRA) or a Health Savings Account (HSA).

The chart below shows how enrollment in HDHP/SOs has increased, from 4% of workers in 2006 to 29% in 2018. For 2018, there was no difference in the utilization of HDHP/SOs between large vs. small companies. Note that prescriptions are usually excluded from these general annual deductibles in employer plans. For 2018, 83% of workers had coverage for prescription drugs without having to first meet the annual deductible. 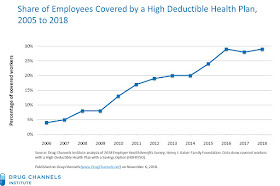 There has been little growth in the past few years. Employers may be less willing to shift more costs onto their employees. There is also growing evidence that HDHPs deter people from seeking necessary and appropriate healthcare services. A booming economy and greater competition for workers could even reverse the trend toward high-deductible plans..

Below, we compare cost sharing for prescription drugs in HDHPs/SOs with plans that lack high deductibles. These other plans include health maintenance organizations (HMOs),
preferred provider organizations (PPOs), and point-of-service (POS) plans. Note that our presentation below differs from our analysis in previous years. This year, we present the plan types separately. 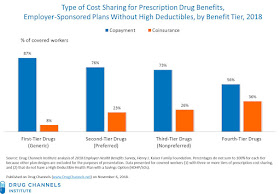 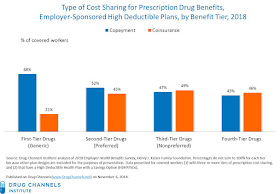 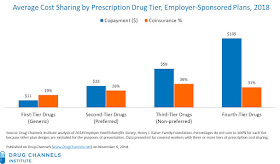 The chart below examines the distribution of coinsurance structures for the drugs on the fourth and specialty tiers. Some workers are in plans that limit out-of-pocket maximum dollar coinsurance payments. However, almost half of all workers have no out-of-pocket maximum for fourth-tier specialty drugs, and one in five has no limit for fourth-tier drugs. 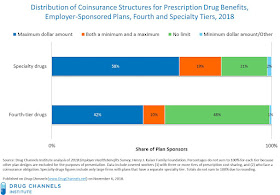 Just ‘cause I tell a joke or two, it doesn’t mean that all of this cost-shifting is good for patients. More to come.

We lost Aretha Franklin this year. Listen to the Queen of Soul explain pharmacy benefit design. Click here if you can’t see the video.