Our Exclusive Analysis: Nearly One in Three U.S. Pharmacies Is a 340B Contract Pharmacy; Five Chains Dominate 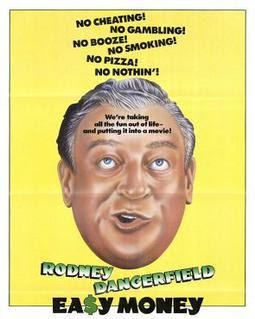 Pharmacies continue to profit from the 340B Drug Pricing Program’s explosive growth.

Our latest exclusive analysis finds that about 21,600 pharmacy locations now act as contract pharmacies for the hospitals and other healthcare providers that participate in the 340B program. The total number of locations has grown by 9% over the past 12 months. The five largest retail pharmacy chains—Walgreens, CVS, Walmart, Albertsons/Rite Aid, and Kroger—account for two-thirds of 340B contract pharmacy locations.

This growth is unsurprising. The U.S. Government Accountability Office (GAO) has now documented the tremendous profits available to 340B contract pharmacies. See GAO Confirms It: 340B Hospitals and Contract Pharmacies Profit from Low-Income, Uninsured Patients.

Does Congress really want the 340B program to provide outsize financial benefits to a handful of large, multi-billion-dollar, for-profit pharmacy chains? Should investors be concerned about how much pharmacies are earning from this embattled program?

The contract pharmacy process is complex and sometimes confusing. To follow the 340B dollar, see Section 10.5 of our 2018 Economic Report on U.S. Pharmacies and Pharmacy Benefit Managers.

The 340B program has grown to account for at least 6% of the total U.S. drug market. According to data provided to Drug Channels by HRSA, discounted purchases made under the program via Apexus, the HRSA-designated Prime Vendor, totaled $19.3 billion in 2017. What’s more, since 2014, purchases under the program have grown at an average rate of 29% per year. Over the same period, manufacturers’ net drug sales have grown at an average annual rate of less than 5%.

To profile the 340B contract pharmacy market, Drug Channels Institute examined HRSA’s Contract Pharmacy Daily Report, as published on July 1, 2018. We screened out all contracts that had been terminated before that date. Using our proprietary database, we classified all contract pharmacy locations by parent organization. Most chains are listed with multiple alternate names.

Note that GAO’s recent report concluded that “HRSA does not have complete data on the total number of contract pharmacy arrangements in the 340B Program to inform its oversight efforts.”

The chart below shows that since HRSA’s 2010 change in guidance, the number of contract pharmacies has increased sharply. 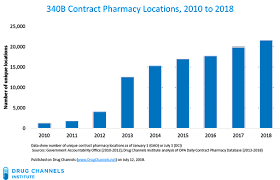 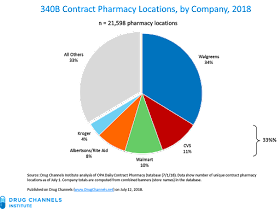 The other major retail chains—CVS, Walmart, Albertsons/Rite Aid, and Kroger—account for more than 7,000 additional 340B contract pharmacy locations. Thousands of independent pharmacies and small chains participate, too.

The chart below shows the growth in 340B participation for the three largest chains since our first analysis in 2013. In line with overall program growth, the largest chains have dramatically increased the number of locations acting as 340B contract pharmacies. 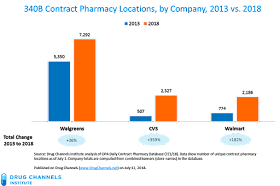 GAO Confirms It: 340B Hospitals and Contract Pharmacies Profit from Low-Income, Uninsured Patients explains how pharmacies are sharing in the 340B discounts intended for covered entities. Often, these profits appear to come at the expense of low-income, uninsured patients. The revelations in the GAO’s recent report should make everyone concerned about the spectacular growth documented above.

I outline some suggested policy changes in my previous post. Without action by Congress, the 340B program will continue to enrich pharmacies at the expense of needy patients.

Next week, I’ll document how the largest specialty pharmacies and pharmacy benefit managers are profiting from the 340B contract pharmacy boom.