GAO Confirms It: 340B Hospitals and Contract Pharmacies Profit from Low-Income, Uninsured Patients 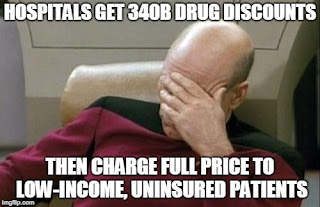 The United States Government Accountability Office (GAO) has just issued a must-read report on the 340B Drug Pricing Program: Federal Oversight of Compliance at 340B Contract Pharmacies Needs Improvement.

Some of the report’s most startling revelations confirm our worst fears about how hospitals and pharmacies are abusing the 340B program.

Here are two especially dispiriting findings from the GAO’s analysis:
Bottom line: Hospitals and pharmacies are making money from poor people. Are you kidding me?!? For shame!

The 340B program’s apologists will have a hard time rebutting the uncomfortable facts from this GAO report. Calling something a “drug discount program” apparently doesn’t mean that the neediest patients get access to those discounts. Read on, and prepare to be outraged.

P.S. In two upcoming articles about 340B, I’ll review the pharmacies participating in the program and then examine the role of specialty pharmacies and pharmacy benefit managers.

As always, I encourage you to read the source material for yourself. Click here to access the full GAO report. It’s a dense, complex overview of how 340B covered entities work with external contract pharmacies—and the many unresolved problems with the 340B program.

The GAO’s analysis confirms what I have uncovered in previous Drug Channels articles. The government’s report also supports many other observations that I have made over the years:
SOAKING THE POOR

The GAO received survey responses from 55 covered entities: 27 federal grantees and 28 hospitals. The GAO summarized the results in this damning chart: 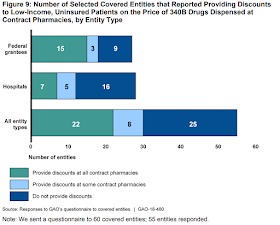 As you can see, an astounding share of covered entities—33% of federal grantees and 57% of hospitals—do not provide discounts to low-income, uninsured patients. I am stunned by this revelation. Poor patients pay full price, while the hospital collects a big discount.

Indeed, the GAO report confirms that a minority of hospitals do the right thing by passing along some or all of the drug discounts. The report discusses how these entities determine eligibility and communicate the pricing to patients.

But the GAO data, which come from an independent government oversight agency, unequivocally demonstrate that most hospitals are not sharing the savings with needy patients. The GAO’s latest findings confirm the results of the 2014 Office of Inspector General (OIG) report, which I reviewed in New OIG Report Confirms Our Worst Fears About 340B Contract Pharmacy Abuses. The earlier study found that two out of three hospitals did not offer the 340B discounted prescription price to uninsured patients via contract pharmacies.

So be skeptical when you read stories about the generosity of a 340B covered entity. As always, the plural of anecdote is not data.

The GAO report also provides the first public look at the astounding profits that some contract pharmacies can earn from the 340B program.

As a reminder, 340B contract pharmacies earn per-prescription fees paid by the 340B entity instead of typical dispensing spreads and fees. For background, see Section 10.5 of our 2018 Economic Report on U.S. Pharmacies and Pharmacy Benefit Managers.

Appendix A lists the fee arrangements in agreements that the GAO reviewed. Here is how I characterize the three basic payment structures:
The table below summarizes our exclusive analysis of the 28 agreements with comparable information.

Some observations about these fees:
Bottom line: It’s clear that 340B entities are paying fees that often far exceed a pharmacy’s typical profits from dispensing a third-party-paid prescription.

Even worse, these big profits are often being earned on prescriptions for which a low-income, uninsured patient paid full price. That’s outrageous.

Large, for-profit pharmacy chains are the primary operators of contract pharmacies. As I asked last year in The Booming 340B Contract Pharmacy Profits of Walgreens, CVS, Rite Aid, and Walmart: “How is the program working as intended when multi-billion dollar, publicly traded pharmacies garner a disproportionate share of 340B profits by dispensing prescriptions to patients with good third-party insurance?”

TIME FOR A CHANGE

The 340B Drug Pricing Program continues to expand at double-digit rates, per The 340B Program Reached $19.3 Billion in 2017—As Hospitals’ Charity Care Has Dropped (Note that these figures were provided to me by the Health Resources and Services Administration.)