This week, I’m rerunning some popular posts before the holiday week. Click here to see the original post and comments from April 2018. 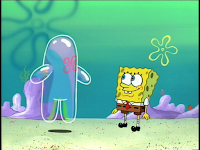 In 2017, the gross-to-net bubble—the ever-growing pile of money between a manufacturer’s list price for a drug and the net price after rebates and other reductions—hit a new high.

Based on new data from IQVIA, manufacturers of brand-name drugs in 2017 reduced list price revenues by an astonishing $153 billion. Those reductions came primarily from rebates, discounts, and other payments to the drug channel. That figure has grown by 10% from the 2016 figure, even though net prices for brand-name drugs grew by only 1.9%.

We can no longer ignore the warped incentives created by our bubble buddy. As regular readers know, I think plan sponsors and insurers should be more transparent about what they do with the billions collected via pharmacy benefit managers (PBMs) from manufacturers—or even be forced to pass through these rebates to point of sale. Read on and let me know what you think.

To measure the value of manufacturer payments into the system, we rely on IQVIA’s excellent new Medicine Use and Spending in the U.S.: A Review of 2017 and Outlook to 2022. It’s a valuable report that is full of fact-based insights about U.S. pharmaceuticals.

First, some background on terminology.
For more background, see Section 5.3. of our 2018 Economic Report on U.S. Pharmacies and Pharmacy Benefit Managers.

Here are our three observations on the latest IQVIA data.


IQVIA estimates that in 2017, pharmaceutical manufacturers received only 56% of the list price of protected brand-name drugs. In other words, gross-to-net reductions lowered revenues at list prices by 44%. (See page 44 of the IQVIA report.) This figure is consistent with the public disclosures made by three of the largest pharmaceutical manufacturers. See Payer Power: Why Eli Lilly, Janssen, and Merck Deeply Discount Their Drug Prices . The three companies reported average discounts from list prices of 42% to 51%.

The IQVIA data explain why you should ignore the many bogus studies of drugs’ list prices. Politicians love to bloviate about list prices, but those figures clearly do not reflect what drug makers earn.

IQVIA provided Drug Channels with unpublished data on the total gross and net sales of protected and new brand-name drugs. Using these data, we computed that in 2017, total gross-to-net reductions for brand-name drugs were a whopping $153 billion. As the chart below shows, that figure has more than doubled over the past five years. 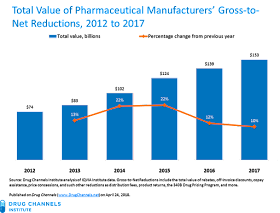 
The growth in rebates and other discounts means that manufacturers have been experiencing more limited growth in net prices than the growth in brand-name drugs’ list prices.

IQVIA doesn’t report changes in list prices. It does, however, report changes in invoice prices. For brand-name drugs, changes in invoice and list prices are highly correlated. The chart below shows invoice and net price changes for brand-name products that are more than two years old and have not yet faced generic competition. In 2017, invoice prices grew by 6.9%, but net prices grew by only 1.9%. 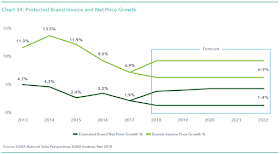 The slow growth in drug costs is consistent with the data that I discussed in New Express Scripts Data: The Drug Spending Slowdown Is Real. (I’ll be covering the other PBMs’ drug trend report in May.) I summarized the key factors behind the gross-to-net disparities in my article about payer power.

Though the gap between invoice and net prices narrowed in 2017, the total value of manufacturers’ gross-to-net reductions grew by 10%, from $139 billion to $153 billion.
3) Brand-name drug list prices are growing more slowly.

I’ve highlighted problems and distortions with our bubble buddy in numerous articles, including:
At last week's PCMA Policy Forum, Dr. Scott Gottlieb, commissioner of the U.S. Food and Drug Administration, delivered another must-read speech about the state of the drug channel. He commented about how high list prices with high rebates can hurt patients, and then applauded recent point-of-sale rebate efforts:


“I’m encouraged by the actions taken by some of your members to help patients, prescribers, and pharmacists identify more affordable medicines at the point of care.

I also applaud the actions recently announced by some insurers that they would pass manufacturer’s drug rebates, often negotiated with PBMs, directly to their fully insured members with employer-based insurance – about 10 million covered lives. This is a bold action that will help create a fairer, more transparent market. I hope that other insurers, employers, and manufacturers follow their lead. I also hope that your industry will continue to innovate to make it more transparent to pass along these rebates.”

Like Mr. Squarepants, we are all ready for a reset of the current drug channel system.