This week, I’m rerunning some popular posts before the holiday week. Click here to see the original post and comments from February 2018. 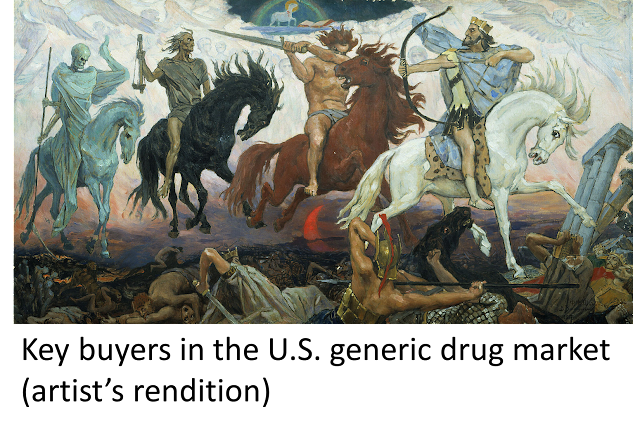 Below, we examine the four generic drug mega-buyers behind this pressure: Red Oak, Walgreens Boots Alliance, McKesson and ClarusOne, and Express Script’s EconDisc.

We estimate that in 2017, these four organizations accounted for an astounding 90% of total U.S. generic drug purchases from manufacturers. Read on for our market share estimates, business profiles, and the outlook for 2018. Spoiler alert: The forecast calls for generic pain.

Today’s post is a sneak peek at our forthcoming 2018 Economic Report on U.S. Pharmacies and Pharmacy Benefit Managers. The new edition will be bigger than better than ever. Look for it on February 27!

THE FOUR HORSEMEN OF THE GENERIC APOCALYPSE

As generics come to dominate pharmacy dispensing, those pharmacies and wholesalers with below-average acquisition costs will be the best positioned to succeed. In response, the largest wholesalers and drugstore chains have therefore entered into new combinations that aggregate generic purchasing power.

Here is our summary of the generic power buyers for 2017. As I discuss below, market changes in 2018 will shift share toward Red Oak and WBAD. 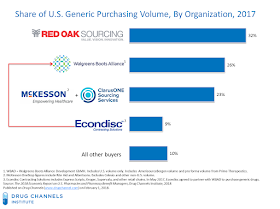 Here are brief profiles of the four horsemen entities:


In December 2013, CVS Health and Cardinal Health announced a 50/50 generic drug buying joint venture that began operating in mid-2014 as Red Oak Sourcing, LLC. The joint venture does not require extensive business integration or acquisition expenses, nor does it fundamentally change each company’s current supply chain and distribution operations. We provide additional details about the Cardinal-CVS relationship in Section 8.3.2. of our 2017–18 Economic Report on Pharmaceutical Wholesalers and Specialty Distributors.

We estimate that Red Oak is now the largest buyer of generic drugs. CVS Health’s 2015 acquisition shifted the generic purchasing volume of Target and Omnicare to Red Oak. In 2016, Cardinal Health began a multiyear agreement with OptumRx to supply generic and brand pharmaceuticals to OptumRx's mail and specialty pharmacies, including the Catamaran business. Before OptumRx’s acquisition of Catamaran, OptumRx had purchased generics directly from manufacturers.

Given its scale, some generic drug makers apparently refer to this group as toxicodendron diversilobum.


In December 2014, shareholders voted to approve the combination of Walgreens and Alliance Boots. In 2012, after the first stage of the merger, the companies had formed Walgreens Boots Alliance Development (WBAD; pronounced "We Bad"), a Swiss joint venture with the most awesome name for a buying group ever. See the video below for the secret history behind this entity’s name.

As part of Walgreens’ supply agreement with AmerisourceBergen, ABC can source generic drugs and other products through Walgreens Boots Alliance. By purchasing via WBA, ABC shares in (and contributes to) the purchasing synergies of Walgreens Boots Alliance. AmerisourceBergen’s pharmacy customers, such as the ones that participate in the wholesaler’s PRxO generics program, also benefit from the reduced acquisition costs if ABC shares the savings with its customers. For more on the the WBA-ABC relationship, see in Section 7.3.2. of our 2017–18 wholesaler report .

WBAD will account for a bigger share of purchases in 2018. In 2017, WBA and Prime Therapeutics formed AllianceRx Walgreens Prime, a new company that combines their respective central-fill mail and specialty pharmacies. We include generic volume from Prime’s mail pharmacy in the figures above. Once Walgreens Boots Alliance completes its transaction with Rite Aid, then Rite Aid’s generics volume will likely shift from OneStop to WBAD. See Observations on the New Walgreens Boots Alliance-Rite Aid Deal.


Unlike its wholesaler peers, McKesson has channeled its customers’ generic purchasing volume into its own generic program, OneStop. This has added leverage and scale to McKesson’s negotiations with generic manufacturers. For instance, under its arrangement with McKesson, Rite Aid began sourcing generics from OneStop. Other retailers that have shifted from direct generic procurement to OneStop include supermarket chains Albertsons and Ahold USA.

McKesson also has global generic purchasing scale. In October 2013, it announced the acquisition of Franz Haniel’s majority stake in Celesio AG, one of the largest pan-European wholesalers. In December 2014, the companies began operating as an integrated company. In 2015, McKesson established McKesson Global Procurement & Sourcing Limited, a London-based subsidiary focused on manufacturer negotiations. It claims to have signed global agreements with such generic manufacturers as Teva, Mylan, Actavis, and Sandoz.

In 2016, Walmart and McKesson formed ClarusOne Sourcing Services LLP to source generic pharmaceuticals for their respective U.S. operations. (See Why Walmart Is Finally Joining McKesson for Generic Purchasing.) McKesson is Walmart’s longtime brand-name drug supplier. ClarusOne is jointly owned by both companies, so McKesson’s profits from the Walmart relationship will not be as great as its profits from retailers that buy via OneStop. ClarusOne is fully operational and has been negotiating with manufacturers.


In 2010, Express Scripts, which operates the third-largest U.S. pharmacy, formed Econdisc Contracting Solutions. It is a group purchasing organization for generics that includes Express Scripts, two major supermarket chains (Kroger and Supervalu), and other smaller chains.

In May 2017, Express Scripts’ Econdisc group purchasing organization agreed to partner with WBAD to purchase generic drugs. Express Scripts is participating via Innovative Product Alignment (IPA), a newly created subsidiary that will gain some price transparency into—and be able to audit—WBAD. (Contrary to popular belief, it was not named IPA because Express Scripts CEO Tim Wentworth likes that style of beer.) Express Scripts will not shut down Econdisc, and AmerisourceBergen will reportedly not gain additional volume from the arrangement. We therefore show it as a separate entity above.


There are other significant buyers that are not broken out in the chart above. These include:

The efforts and success of the generic mega-buyers are crucial to the ongoing deflation in the U.S. generic market that I analyze in Generic Deflation Roils the Channel—And Will Get Worse.

HOW DID WBAD GET ITS NAME?

The video below was leaked to me by sources deep within WBAD’s secret Bern mountain compound. It shows two Walgreens executives preparing to negotiate with generic manufacturers. Click here if you can’t see the video. (Warning: NSFW language.)

CORRECTION: Smith Drug and Burlington Drug are no longer part of Optisource.