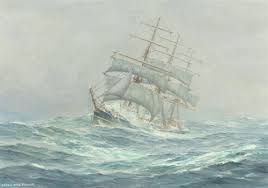 Pharmaceutical wholesalers are no longer growth companies. They are struggling with ever larger customers, ongoing generic deflation, and the downsides of specialty pharmacy.

McKesson has illustrated these challenges in the financial results for its 2018 fiscal year. (See the links below.) The company projects that its 2019 fiscal year distribution profits will be flat to negative, due to customer losses and/or lower margins from contract renewals.

Below, I consider McKesson’s challenges with many of its largest customers, including:
Like its peers, McKesson faces an uncomfortable conflux of uncommon customer crosswinds. Investors are surely hoping that rough seas make good sailors.

As always, I encourage you to read the original source material for yourself. Here are links to McKesson’s financial results for its 2018 fiscal year, which ended with the first calendar quarter of 2018:
CONSIDER THESE CURDLING CONTRACTS

What’s surprising is that CVS Health’s specialty pharmacy dispensing revenues appear to be growing more quickly than its purchases from McKesson. 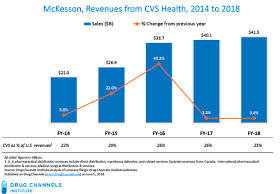 But as you can see in the chart above, McKesson’s revenues from CVS Health grew much more slowly over a comparable period—3.5% and 3.4%, respectively—than did CVS Health’s specialty revenues.

In 2014, McKesson extended its agreement with CVS Health’s Caremark pharmacies through June 2019. This means that McKesson’s faces a major renegotiation with a customer that appears to be reducing its dependence on the wholesaler.


Rite Aid has for years been McKesson’s second-largest customer. Under their 2014 agreement, McKesson took over the purchasing and distribution of generic pharmaceuticals for Rite Aid. This agreement will expire in May 2019. Rite Aid has successfully transferred 1,932 stores to Walgreens Boots Alliance (WBA). Consequently, McKesson’s revenues from Rite Aid will drop by more than 40%.

In February 2018, Albertsons—a longtime McKesson customer—announced its merger with Rite Aid. If the transaction receives regulatory approval, the combined company’s 2017 pro forma prescription dispensing revenues would have amounted to $16 billion and more than 4,300 pharmacies. (Note that this pro forma figure excludes the Rite Aid stores purchased by Walgreens.)

In 2016, following the Albertsons-Safeway merger, Albertsons began a five-year agreement with McKesson for both brand and generic drug procurement. We estimate that Albertsons was one of McKesson’s ten largest customers in 2017. See Exhibit 111 of our 2017–18 Economic Report on Pharmaceutical Wholesalers and Specialty Distributors.

This all sounds good for McKesson, right?

The WBAD option expires in May 2019. At last month’s Albertsons / Rite Aid analyst presentation, Rite Aid confirmed that the option was a synergy identified in the Albertsons deal process. Here’s the crucial slide: 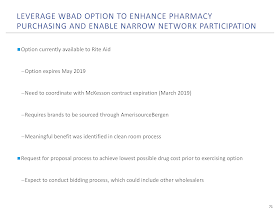 McKesson therefore faces the prospect that the Albertsons’ generic procurement could shift to WBAD and brand purchasing shifts to AmerisourceBergen. This may occur in 2019 if Rite Aid exercises its WBAD option, or possibly not until 2021, when the Albertsons agreement ends. Therefore, McKesson will either (1) lose its whole generic sourcing margin from Albertsons-Rite Aid, or (2) be forced to reprice the business at reduced profitability.

McKesson’s relationships with other key customers is also under pressure.
McKesson was founded in 1833 as Olcott, McKesson & Co. and initially served clipper-ship captains who came to stock their medicine chests. Will the company’s nautical heritage help it survive stormy waters?