The AIDS Institute studied health plans in Florida and uncovered a troubling reality: Patients are often unable to find out if their plan has a copay accumulator adjustment program.

Even when the information was somehow available, it was vague and ambiguous.

The AIDS Institute’s research shows how unsuspecting patients can get stuck with exorbitant out-of-pocket expenses for specialty drugs that have no generic or therapeutic alternatives. That’s why I told CNBC this week that accumulators are “as much of a cash grab from patients as I can possibly imagine.”

It’s an important article about the misleading marketing and incomplete disclosure of a crucial benefit detail. Read on and see what you think.

In response, patient advocates are ringing the alarm, warning against the harm these copay accumulator policies will cause to beneficiaries and how difficult it is to determine if the plan they are in is implementing this new practice.

Concerned by the impact copay accumulators will have on people accessing HIV and hepatitis C drugs, The AIDS Institute, based in Tampa, Florida and Washington DC, examined Florida’s qualified health plans to determine if and how plans were implementing these new policies. The AIDS Institute discovered just how difficult it is to find and decipher the relevant information.

Health insurers must present their health benefit design and patient costs in a transparent manner. This helps consumers make informed decisions while they are selecting a plan, ensuring it best suits their medical needs and is affordable.

Without knowing that the plan they have been in will no longer count copay coupons towards their out-of-pocket spending can translate into unexpected prescription drug costs that can equal several thousand dollars in a single month. This can lead to treatment interruptions that can impact a person’s health.

Through extensive research of plan documents and phone calls to plan customer service representatives, The AIDS Institute found that four out of six major insurers on the Florida marketplace had references to copay accumulator programs in their plan documents. Implementation varied by issuer, with some being rather vague and unclear as to whether they were enforcing the policy consistently across all drug classes, selectively, or not at all.

All plans buried the information, making it difficult to determine their policy. Finding the exact language required following a trail through multiple links and documents and was often found in documentation that is not available to a consumer until after enrolled in the plan. One plan representative indicated the policy is being implemented but still has not provided any written information to back it up.

The AIDS Institute began the search as if a prospective enrollee was shopping on Healthcare.gov. However, unlike a typical health insurance shopper, we were looking for specific language regarding the applicability of copay coupons; basically, doing searches on certain words, something your average beneficiary would not even think of doing while searching for a health plan.

It took seven steps to find a reference to copay accumulators for Florida Blue, the largest private insurer in Florida. The copay accumulator language was finally discovered on page 47 in a section called “Pharmacy Limitations and Exclusions” within a 144-page “Schedule of Benefits” document that is part of the plan contract. Figure 1 below outlines the steps taken to locate Florida Blue’s copay accumulator policy. 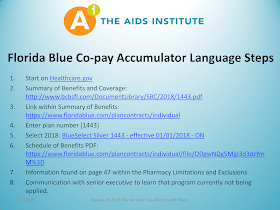 The language we found read “we reserve the right not to apply” copay assistance towards a beneficiary’s deductible. The good news for Florida Blue’s beneficiaries is that when The AIDS Institute contacted them, they indicated it was not currently implementing the accumulator adjustment program. But, how will a beneficiary know when and if it will be applied, and will it be for some drug classes or all drugs?

The same “we reserve the right not to apply” language was found in Florida Health Care plans on page 146 of the “Individual Certificate of Coverage” document. Unfortunately for Florida Health Care beneficiaries, a plan representative verbally confirmed with The AIDS Institute that they are implementing the policy and copay assistance does not count towards a beneficiary’s deductible.

To track down Molina’s policy required tracing the information through several links and filtering through plan details on the insurer’s website that eventually led to page 72 of the “Evidence of Coverage” document after eight steps were taken.

Despite an extensive search for information on Health First’s copay accumulator policies, no documentation was found. But after multiple calls to their call center, it was made known that manufacturer copay assistance is not permitted to count towards a member’s deductible or out-of-pocket spending. So not only would a consumer not know that this was the insurer’s policy, there is absolutely no written documentation to back it up.

Figure 2 is a description of the copay accumulator policies for six Florida insures, and where the information was found. 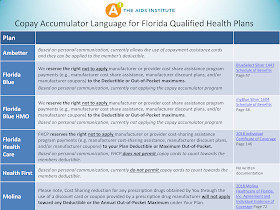 A LACK OF TRANSPARENCY

While the plans reviewed by The AIDS Institute in Florida provide a concrete example of how these policies are being implemented and how the information is being made available in just one state, we know that the same is occurring across the country.

It is obvious that insures are failing to provide this information to beneficiaries in a transparent, consumer-friendly manner. Beneficiaries need to know this information up front and in a clear manner. Implementation of these new practices could add thousands of dollars in a single month to an individual or a family’s drug cost.

It is because of this lack of transparency, sixty HIV organizations recently sent a letter to all state insurance commissioners and attorneys general asking them to investigate this new practice. At a minimum, insurers need to post their co-pay card policies clearly in plan documents and on formularies. They also need to notify beneficiaries about these changes.

Better yet, they should just totally reverse this harmful practice so that people can access the drugs that they need to stay healthy and alive.

To learn more about The AIDS Institute and its work on accumulators, please contact me at cschmid@theaidsinstitute.org.