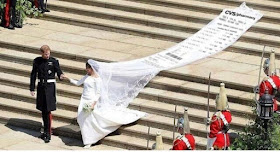 It’s almost June—wedding season! Our invitation to the recent royal nuptials apparently got lost in the mail, but I invite you to our own monthly shower of noteworthy news:
Plus, we revisit the classic Drug Channels black swan article for hints to a future without PBM rebates.

P.S. @DrugChannels on Twitter is now approaching 6,000 followers. Throw some rice and enjoy my daily tweets of interesting news, stories, and the reports you need to read.


ICYMI, the Columbus Dispatch has published a series of stories on pharmacy benefit manager (PBM) practices in Ohio’s managed Medicaid program. The articles have focused mainly on CVS Caremark, which is the PBM for four of the state’s five providers.

The latest article linked above describes a significant but unexplained decrease in Ohio pharmacies’ reimbursement for Suboxone during 2017, noting:


“[A] Dispatch examination of the National Average Drug Acquisition Cost database, which shows what pharmacies across the country are receiving for each drug, showed no movement in the price for any type of Suboxone over the final three quarters of 2017. A similar look at Ohio’s Medicaid drug-utilization database, which shows how much taxpayers are being charged by the PBMs for each drug, also shows little movement in the price tag for Suboxone.“

If true, this article implies that CVS may have been earning inappropriate spreads in the state’s Medicaid program. I have no way of independently evaluating these data. The reporter also seems incurious about whether pharmacies earn higher profits from other prescriptions to offset any losses. Regardless, everyone interested in PBMs’ business model should be following the developments in Ohio.
Albertsons / Rite Aid Analyst Presentation, Part 2, Albertsons


In this recent investor presentation, Albertsons and Rite Aid outlined their pharmacy and PBM strategies following the two companies’ merger. There’s lots of useful data on pharmacy operations, including the chart below that summarizes the combined footprint: 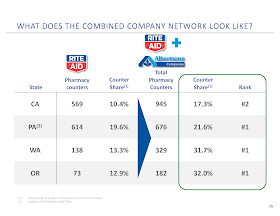 Pages 67 and 68 cite Drug Channels Institute data to illustrate the growth of preferred and limited pharmacy networks. A key element of the combined company’s go-forward strategy: deeper participation in these networks. As you may recall, Rite Aid is poorly positioned in 2018’s Medicare Part D plans, while Albertsons is an active participant.

As part of its asset sale to Walgreens Boots Alliance, Rite Aid has an option to source generics via Walgreens Boots Alliance Development (WBAD). The option expires in May 2019 and requires that brands be sourced via AmerisourceBergen. Expect wholesalers’ margins to tighten as McKesson bids to retain this business.
Impact of Prohibiting HIV Prescription Drug Co-pay Cards from Counting Towards Deductibles and Maximum Out-of-Pocket Expenses, Federal AIDS Policy Partnership


In March 2017, I published this highly speculative article analyzing Dr. Scott Gottlieb’s proposal that that brand-name pricing be migrated from today’s formulary rebates to up-front discounts. As I explained, such a shift would radically disrupt the business models and economics of PBMs, wholesalers, and pharmacies.

Given the radical ideas proposed in the Trump Administration’s American Patients First blueprint, it might be a good time to reconsider what I termed a black swan event—a massively important yet unexpected break from current practice.
Photo credit: @juddweiss
Adam J. Fein, Ph.D. on Tuesday, May 29, 2018