2016 Drug Spending: The Shift from Employers to Government Payers—And Troubling Trends For Patients 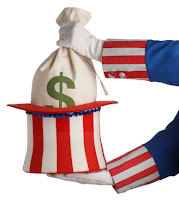 In CMS Confirms It: Drug Spending Slows, Hospital and Physician Spending Grows, I showed that growth in drug spending was significantly below the growth rate of overall national healthcare spending. Today, I delve into trends in third-party and patient payment for prescription drugs.

In 2016, all payers experienced a slowdown in spending. Employers' drug spending growth was nearly flat, while consumers (on average) paid less out of pocket. And for the third year in a row, spending by government payers exceeded spending by employers. The NHE are net of rebates, so gross-to-net bubblenomics play a part in these figures.

I suspect that the very slow growth in employers’ net costs occurred partly because employees are being forced to pay debilitating coinsurance—in some cases with no limit on out-of-pocket drug expenses.

The NHE data therefore suggest a troubling gap between haves and have-nots, based on benefit design and diagnosis. Some people can make do with inexpensive generic drugs, while others end up with sky-high out-of-pocket costs.

Read on for our wonktastic deep dive into the 2016 spending data.

WHO PAID FOR OUR DRUGS?

The chart below shows our analysis of payment sources for outpatient prescription drugs (share of dollars) in 2016, the most recent available data from the National Health Expenditures (NHE) accounts. 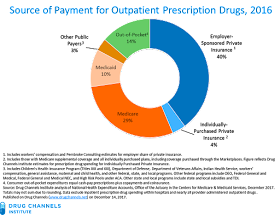 Per CMS Confirms It: Drug Spending Slows, Hospital and Physician Spending Grows, outpatient spending on prescription drugs in 2016 accounted for 9.8% of total U.S. spending. However, prescription drugs’ share of spending varied by payer type. The chart below shows net outpatient drug spending as a share of U.S. national health expenditures for each of the three largest payers. 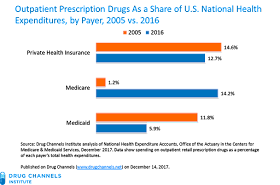 The percentages differ among payers partly because the populations covered by different payers have different medical needs. In addition, rebate amounts differ. Medicaid’s best price requirement means that it receives the deepest discounts.

The historical trends reflect changes in coverage. The Medicare Prescription Drug, Improvement, and Modernization Act (MMA) of 2003 created the Part D program, which launched in 2006. The MMA greatly increased Medicare’s spending on outpatient prescription drugs. Due to the Medicare Part D program, outpatient prescription drugs increased from 1.2% of Medicare’s total spending in 2005 to 14.2% in 2016. Drug spending for dual-eligible beneficiaries—those eligible for both Medicare Part D and Medicaid—was shifted to Medicare. That’s why Medicaid’s spending on drugs dropped as a share of its total program spending.

The chart below shows the year-over-year growth rates in expenditures, by payer. 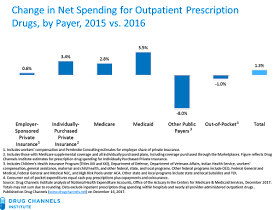