The Centers for Medicare & Medicaid Services (CMS) has just released the initial raw data on the 2018 Medicare Part D plans.

Our exclusive analysis of these data reveals that preferred cost sharing pharmacy networks have officially won. For 2018, 99% of Medicare Part D regional prescription drug plans (PDP) will have a preferred network. This figure exceeds those of the past four years. The three largest open network plans from 2017—CVS Health’s SilverScript Choice and WellCare’s Classic and Extra plans—have given up and will have preferred networks.

Below, I provide historical data on preferred networks’ growth and then discuss the top eight companies behind the 2018 plans. As I predicted many years ago, narrow pharmacy networks—whether preferred or limited models—have become an unstoppable force in benefit design.

To identify the 2018 Part D preferred cost sharing pharmacy networks, I used the 2018 Drug and Health Plan Data and the 2018 PDP Landscape Source Files (v 09 22 17). My analysis includes only stand-alone PDPs. I eliminated these plans from the sample:
My final sample included 74 plans, which operate 782 regional PDPs.
INDESTRUCTIBLE

In 2018, preferred cost sharing networks have overtaken the Part D landscape. The chart shows the growth of preferred networks in stand-alone prescription drug plans. In 2011, only 7% of total regional PDPs had a preferred network. In 2018, 99% of PDPs will have preferred pharmacy networks. I detect a trend! 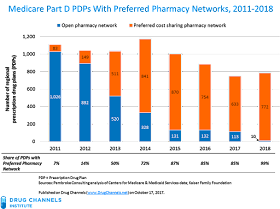 This chart updates Exhibit 106 in our 2017 Economic Report on U.S. Pharmacies and Pharmacy Benefit Managers.

NOTHING CAN STOP IT!

Here are the 2018 highlights from eight major companies. These companies account for 674 (86%) of the total 782 PDPs. One plan does not have a preferred network in one region, so there are 673 plans with a preferred network.
Narrow network models encourage or require consumers to use designated pharmacies or channels instead of allowing those consumers to choose from an open network containing nearly all pharmacies. Payers’ use of the more tightly controlled pharmacy network model will keep growing as they seek additional drug-spending savings. Seniors have accepted these plans, encouraged by the out-of-pocket prescription savings opportunities. Retail pharmacies are willing to accept lower reimbursements in exchange for increased store traffic. For more on the economics and strategies of narrow network models, see Chapter 7 of our 2017 Economic Report on U.S. Pharmacies and Pharmacy Benefit Managers.

COMING ATTRACTIONS: I’ll examine which chains have been absorbed by the major preferred networks. Beware the Blob!