Our 2018 Part D analysis demonstrates the pharmacy industry’s new period of hypercompetition. Seniors are willing to switch pharmacies to reduce out-of-pocket expenses. Chains must therefore reduce their prescription profit margins to compete for a spot in narrow networks. Expect the dominance of preferred networks to the wild card for pharmacies’ 2018 profits.
THE BIG BLIND

Preferred networks use consumer incentives to shift prescription volume into the pharmacies that provide lower costs for the payer or better care to the patient. In the Medicare Part D program, seniors choose their pharmacy while being partially exposed to the costs of this choice. For a detailed primer on narrow network models, see Chapter 7 of our 2017 Economic Report on U.S. Pharmacies and Pharmacy Benefit Managers.

The plans and pharmacies don’t always make it easy to identify which chains are preferred. Send me an email if you think we got something wrong.

Smaller pharmacies participate in pharmacy services administration organizations (PSAOs) to leverage their influence in contract negotiations with the plans. In a future post, I’ll look at PSAOs’ participation in the 2018 Part D plans.

The table below summarizes retail chain participation in the 22 major multi-regional Part D plans with preferred cost sharing pharmacies. These eight retail chains operate nearly 33,000 locations, or about half of all U.S. pharmacy locations. 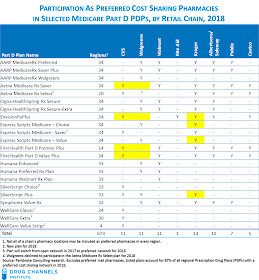 The shaded boxes indicate a change in a chain's participation from 2017 to 2018. Sixteen plans were offered in both years. From our list, three plans will be new for 2018 and three plans will switch from open to preferred networks for 2018.

THE WORLD SERIES OF PHARMACY

Here are our observations on the largest chains:
Numerous sources document payers’ savings from narrow networks. These savings come primarily from pharmacy contracting concessions. For 2018, Part D preferred networks will be the pharmacy industry’s version of lowball poker.