Remicade: A Case Study in How U.S. Pricing and Reimbursement Curb Adoption of Biosimilars

The Centers for Medicare & Medicaid Services (CMS) has just released the Average Sales Prices (ASP) reimbursement data for the fourth quarter of 2017. You can download the drug pricing files here.

Below, I use these data to explore the reimbursement and payer dynamics behind the relatively slow adoption of Inflectra, the first biosimilar of Remicade. The introduction of Renflexis, a second biosimilar, will offer additional insights about pricing and channel strategies.

The U.S. biosimilar market is highly underdeveloped compared with our European counterparts. As this case study shows, it’s pretty, pretty, pretty hard to launch a biosimilar.

A STOP AND CHAT ON BIOSIMILARS

Janssen Biotech’s Remicade accounts for the biggest share of commercial medical benefit drug spending. The FDA has approved two biosimilar versions under the BPCIA:
These provider-administered products are reimbursed mainly under a patient’s medical benefit as a buy-and-bill product. For an overview, see Follow the Vial: The Buy-and-Bill System for Distribution and Reimbursement of Provider-Administered Outpatient Drugs.

Here are three observations on how buy-and-bill reimbursement dynamics and payer decisions posed barriers to the rapid substitution of this provider-administered biosimilar.


Inflectra’s WAC list price at the time of launch was set to be 15% below the WAC list price of Remicade. Newly launched biosimilars that lack a J-code and an ASP history are reimbursed at 106% of the Wholesale Acquisition Cost (WAC) list price. 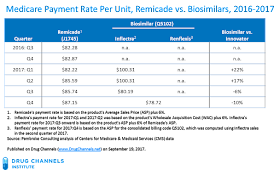 Consequently, during the first half of 2017, the biosimilar Inflectra was more expensive for many third-party payers, including Medicare. If the innovator product and its biosimilar had shared a consolidated billing code, then payers relying on ASP would have paid for both products based on Remicade’s rate. This would have reduced Remicade’s payment rate by 18.0% in the first quarter of 2017 and reduced it by 14.7% in the second quarter of 2017.

Discounts provided under the 340B Drug Pricing Program may also make the profits from administration of the innovator product much higher than for the biosimilar. See our mathematical example of hospital profits in Latest Data Show That Hospitals Are Still Specialty Drug Profiteers.


A provider’s drug reimbursement for the biosimilar is often determined by the ASP-plus formula. Most commercial health plans follow Medicare and use the ASP benchmark for provider-administered specialty drug reimbursement. See this chart.

This structure gives providers a small, incremental financial incentive for biosimilar substitution. The magnitude of this financial benefit will depend upon the ASP gap between the biosimilar and the reference product. See my 2015 post Two Important Updates on Zarxio and Biosimilar Reimbursement.

3) Third-party payers and physicians have not yet fully embraced biosimilars.


Even after a biosimilar launches, payers may still control product access and utilization and not cede that control to providers. In contrast to traditional generic drugs, many health plans do not have policies that mandate biosimilar utilization.

As of late 2016, more than 40% of plans have no policies for mandatory conversion to a biosimilar and have not instituted differential cost-sharing to drive biosimilar adoption. (See the latest EMD Serono Specialty Digest.) Plans expect to make individual decisions about substitution based on such factors as the strength of clinical data, pricing, and FDA review materials.

Remicade benefited from favorable payer coverage. Investment research firm Sanford C. Bernstein & Co. studied the top 40 commercial formularies. It found that for 36% of covered lives analyzed, Inflectra is either not covered or providers are required to use Remicade first. Inflectra was preferred over Remicade for only 2% of the covered lives. Remicade is a chronic therapy, so payers can benefit from an ongoing stream of rebate payments, further limiting substitution. For a minority of lives (42%), coverage was comparable between Remicade and Inflectra.

Physicians’ beliefs may also be impeding the adoption of biosimilars.

The launch of Renflexis will accelerate price competition, which may partially overcome the barriers listed above.
Let’s see if Renflexis can elevate small talk to medium talk.

P.S. This post is adapted from our forthcoming 2017–18 Economic Report on Pharmaceutical Wholesalers and Specialty Distributors, which will be available on October 3, 2017.