What’s In, What’s Out: The New 2018 CVS Health and Express Scripts Formulary Exclusion Lists (Plus: A Sneak Peek From Prime) 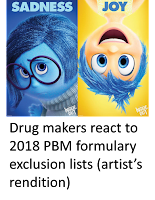 This week, the two largest pharmacy benefit managers (PBMs)—Express Scripts and the CVS/caremark business of CVS Health—released updates to their 2018 formulary exclusion lists. They are available below for your downloading pleasure.

For 2018, Express Scripts was more aggressive, expanding its list to 159 excluded products. At CVS Health, however, the total number of excluded remained steady. The Prime Therapeutics list won’t be available until September, but it will apparently exclude more drugs that either of its PBM peers.

Read on for my 2018 head-to-head comparison, including comments on inflammatory conditions, multiple sclerosis, epinephrine, biosimilars, and more. I also review the reported savings from formulary exclusions. I conclude with some questions about patients. Remember them?

If I have missed anything important, please comment below.

Note that formulary restrictions affect a PBM’s recommended national formulary. These are suggestions, not mandates. Plan sponsors—the PBM's clients—that do not adopt the standard formulary face reduced rebates and/or higher plan costs. Thus, a drug’s appearance on an exclusion list does not guarantee that all patients will lose access. More than half of the commercial market was covered by plans with formulary exclusions.

Here are the 2018 preferred formulary updates:
Express Scripts has also published the following article explaining its strategy: 2018 National Preferred Formulary. CVS Health explains its approach in the introduction to its exclusion list and in this press release.

Note that for 2018, both PBMs published only the changes to their preferred formularies. We must therefore refer to previous lists for a complete list of exclusions. You can find links to the 2017 lists in my August 2016 Drug Channels post Seven Takeaways from the New 2017 CVS Health and Express Scripts Formulary Exclusion Lists.

For more on PBMs and formulary management, see section 5.3. of our 2017 Economic Report on U.S. Pharmacies and Pharmacy Benefit Managers.

SIX OBSERVATIONS ON THE 2018 LISTS


The chart below shows the number of drugs that have been excluded from the national preferred formularies of the two largest PBMs. 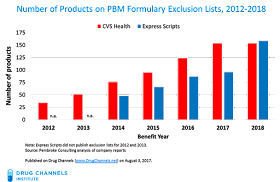 For the first time, the number of products on CVS Health’s list did not grow. It removed 17 products from its 2018 formulary, but it also added 17 other products back to its list. CVS Health appears to have 154 products on its 2018 Standard Control Formulary.

Express Scripts expanded its list to include 159 products. Its 2017 list initially had 85 products, then grew with mid-year additions. For 2018, Express Scripts excluded a further 64 products—46 of which it notes are “high-spend multi-source brand drugs” that have generic equivalents.

Prime Therapeutics—the up-and-coming PBM that is partnered with Walgreens Boots Alliance—will exclude 295 products on its 2018 formulary, called NetResults. Its forthcoming list has 20 new exclusions and 8 add-backs. According to Prime, it excludes more high cost generics and brands that have clinical alternatives than its peers exclude. I may return to Prime’s exclusions when its detailed list is released in September.


The PBMs remain reluctant to clamp down on crucial specialty drug categories.


“Please note that product placement for Hepatitis C and treatment for Inflammatory Conditions are under consideration, and changes may occur based upon changes in market dynamics and new product launches.”

Apparently, the PBMs believe either (1) that patients and prescribers should have access to all MS therapies, or (2) that manufacturers were willing to provide sufficient rebates. (I suspect that your answer will depend on how you feel about PBMs.) The 2016 Express Scripts Drug Trend Report found that for 2016, unit cost trend for MS was 7.1%, which is comparatively low for a specialty category.

3) There were some notable winners and losers.

For osteoporosis, Express Scripts excluded Lilly’s FORTEO in favor of recently launched TYMLOS from Radius. Radius’ stock price jumped more than 10% on the news, though it has already given back some of those gains.

Express Script excluded Synergy’s Trulance in favor of Allergan’s Linzess and Takeda’s Amitiza. Synergy Pharmaceuticals was down by almost 14% as of last night’s close.

CVS added back Symbicort and Invokana, and excluded Dulera and Jardiance. Ronny Gal, Ph.D., of investment research firm Sanford C. Bernstein & Co., nicely summarized the likely motives behind these moves: "Just a price play, we suspect, but shows how fungible these classes have gotten."


Take note of CVS Health’s revised treatment of the controversial epinephrine category. The 2016 CVS list excluded Adrenaclick and offered Auvi-Q, EpiPen, and EpiPen Jr as preferred alternatives. However, in January 2017, CVS began promoting Impax’s Adrenaclick at CVS retail pharmacies for a relatively low cash price. The entertaining backstory can be found in The Weird and Wild Gross-to-Net Adventures of EpiPen and Its Alternatives.

For 2018, the EpiPen AG and Adrenaclick AG will continue to be treated as tier 1 generics in CVS Health’s 2018 Standard Control Formulary. EpiPen (brand) remains on the formulary as a preferred brand product. AuviQ is excluded.

Express Scripts excluded Kaléo’s AUVI-Q, which is infamous for its bonkers pricing strategy. ICYMI: Kaleo and Express Scripts are engaged in complex litigation over rebates and fees. Express Scripts also excluded the epinephrine auto-injectors from A-S Medication, Impax, and Lineage.

5) Biosimilars still have a small impact on the pharmacy benefit.


For colony stimulating factors, Express Scripts excluded Neupogen in favor of its biosimilar (Zarxio) and Granix. CVS had excluded Neupogen last year. The exclusions are somewhat symbolic. These products are typically reimbursed under the medical (not pharmacy) benefit, so PBMs play a very limited role.

Last year, CVS excluded Sanofi’s top-selling Lantus product in favor of its follow-on biologic Basaglar, which is being marketed by Lilly. Surprisingly, Express Scripts did not follow suit this year, despite its alignment with Lilly’s Humalog and Humulin insulin products.


Both PBMs did more this year to quantify the financial impact of their exclusion lists.

According to Express Scripts, employers that use its national preferred formulary will save an additional $2.5 billion in 2018. The chart below plots Express Scripts’ reported savings and the number of excluded products. 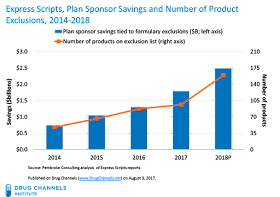 CVS Health highlighted the benefit cost savings associated with its exclusions. It stated: “For clients aligned with our Standard Control Formulary first-quarter per-member-per-month (PMPM) cost was $85.90 compared to $121.12 for those with a Standard Opt-Out Formulary.” Based on figures that CVS Health reported last year, CVS estimates that the 2018 changes to its exclusion list will save $4.4 billion.

As in past years, there are still no independent data verifying these savings claims.

It’s exciting to see the winners and losers from the PBM’s formulary exclusion efforts. However, there are serious unanswered questions about the real-world implications of these lists.

How are individual patients affected by the nonmedical switching implied by exclusion lists? Is care disrupted when a drug is excluded one year and then added back the next year? Where is the peer-reviewed, scientific data assuring us that exclusion lists don’t affect health outcomes?

Alas, I suspect the answers could make me angry, fearful, or disgusted.