In 2015, the most recent year available, Part B spending on drugs reached $25.7 billion. Hospital outpatient sites now constitute more than one-third of Medicare spending and have been crowding out physician offices. Part B payments to physician practices are growing much more slowly than payments to hospitals.

For some time, I have been tracking the evolution of the buy-and-bill system for provider-administered drugs. These new data confirm my predictions that physician offices’ will account for a declining share of the buy-and-bill market. Still unknown: Is this good or bad for patients?

Physician offices and hospital outpatient clinics are the primary sites of administration for such provider-administered drugs as biologicals, injectables, IVIG, immunoglobulins, and other products. 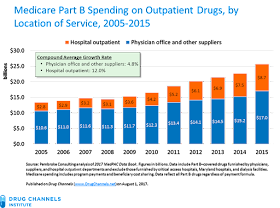 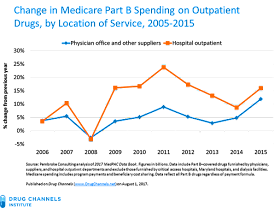 In contrast to Part B, commercial payers have already experienced the shift away from physician practices. More than half of outpatient commercial medical benefit drug spending occurred in hospital outpatient locations. See page 6 of the 2016 Medical Pharmacy Trend Report from Magellan Rx Management.

For a more complete analysis of the buy-and-bill market, see Chapters 3 and 6 of our 2016–17 Economic Report on Pharmaceutical Wholesalers and Specialty Distributors. (Now on sale! The new 2017-18 report will be released in early October.)

HONEY, I BLEW UP THE BUY-AND-BILL MARKET!

As I noted in April’s news roundup, the share of oncology practices owned by hospitals and health systems has doubled in the past five years, from less than 30% in 2010 to nearly 60% in 2015.

Economic pressures have encouraged physicians in community oncology practices to sell their practices to hospitals and health systems. Two key financial incentives have motivated hospitals to acquire these practices:
The surviving independent practices are generally larger and more professionally managed than the practices that have been absorbed by health systems. They are working hard to make sure that they don't shrink themselves.