The Booming 340B Contract Pharmacy Profits of Walgreens, CVS, Rite Aid, and Walmart

Large retail pharmacy chains' rapid expansion (per the fourth chart below) into 340B suggests superior profits.
Every year, I question the economics behind this astounding growth. How many prescriptions do contract pharmacies provide at discounted prices to uninsured, underinsured, and low-income patients? Are pharmacies engaged in profit-sharing agreements with 340B hospitals? Are they earning fees that far exceed fair market value standards? Who is really benefiting from the contract pharmacy boom? 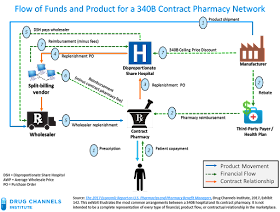 For more on pharmacies’ role and profits from the 340B program, see Section 10.4 of our 2017 Economic Report on U.S. Pharmacies and Pharmacy Benefit Managers.

To profile the 340B contract pharmacy market, Pembroke Consulting examined HRSA’s Contract Pharmacy Daily Report, as published on July 1, 2017. We screened out all contracts that had been terminated before that date.

Using our proprietary database, we classified all contract pharmacy locations by parent organization. Most chains are listed with multiple alternate names. Walgreens locations, for example, appear in the database under 72 unique pharmacy names. CVS locations appear under 80 unique names.

The chart below shows that since HRSA’s 2010 change in guidance, the number of contract pharmacies has increased sharply. 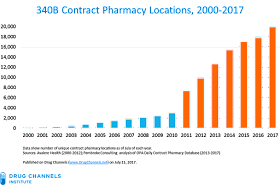 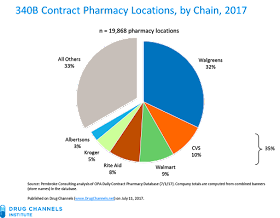 The chart below shows the growth in 340B participation for the four largest chains since our first analysis in 2013. In line with overall program growth, the largest chains have dramatically increased the number of locations acting as 340B contract pharmacies. This implies that the profits have been substantial enough to justify this expansion. 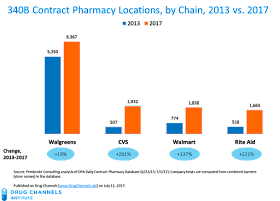 Former Rep. Henry A. Waxman recently claimed that the 340B program "works exactly as intended." But the 340B contract pharmacy market has expanded in ways that few anticipated.

Multiple government studies have documented serious problems with the program. For instance, an Office of Inspector General (OIG) study of 340B contract pharmacies found that two out of three hospitals did not offer the 340B discounted prescription price to uninsured patients via these pharmacies. See New OIG Report Confirms Our Worst Fears About 340B Contract Pharmacy Abuses.

Despite this growth, we still have no transparency into the behavior of these 340B contract pharmacies. None of the public companies reports any information about its participation in the 340B program.

How is the program working as intended when multi-billion dollar, publicly traded pharmacies garner a disproportionate share of 340B profits by dispensing prescriptions to patients with good third-party insurance?

As the saying goes: its good business if you can get away with it!

A small suggestion: The 340B contract pharmacy market would make a great topic for the upcoming House Energy and Commerce Health Subcommittee hearing on the program. In the meantime, the money train will keep chugging along.