10 Hospitals With 340B Contract Pharmacy Mega-Networks

For a follow-up to The Booming 340B Contract Pharmacy Profits of Walgreens, CVS, Rite Aid, and Walmart, let’s examine covered entities’ contract pharmacy networks in the 340B Drug Pricing Program.

Many covered entities have relatively small 340B contract pharmacy networks. However, some have built large networks seemingly designed not to help needy and uninsured patients, but to enrich hospitals and pharmacies.

The top 10 hospitals, listed below, have built mega-networks averaging 277 pharmacies. The largest retail chains and pharmacy benefit managers (PBMs) are active participants in these networks. That’s right: PBMs have joined the 340B party!

Yesterday, the House Energy and Commerce Committee announced a July 18 hearing: Examining HRSA’s Oversight of the 340B Drug Pricing Program. Also below, I pose four questions that committee members should consider about 340B contract pharmacy mega-networks.

Please see my previous post for details on data.

The table below profiles the 340B contract pharmacy networks for the entire market as of July 1, 2017.

Observations on the market:
THE TOP TEN

The table below highlights the 10 DSH entities with the largest 340B contract pharmacy networks. It also shows the most significant partners in each of the networks. 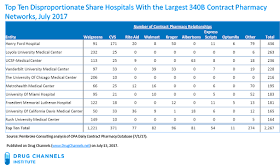 Observations on the top 10:
FOUR QUESTIONS

Defenders of the 340B program’s status quo prefer to ignore the data above. Nothing to see here. Move along!

But the four questions that I asked in 2014 are still relevant:
At next week’s hearing, the Office of Inspector General (OIG) and the General Accounting Office (GAO) will testify about the 340B program. Both agencies have been highly critical of the 340B program’s operations and oversight. I look forward to their comments on the booming contract pharmacy business.