Profits in the 2017 Fortune 500: Manufacturers vs. Wholesalers, PBMs, and Pharmacies

Time for my annual review of the Fortune 500 list. Every year, this is one of my most popular posts, because it helps us “follow the dollar” and understand how drug channel intermediaries make money.

Using the Fortune data, I explore the profitability and shareholder returns of the largest public drug wholesalers, chain pharmacies, and pharmacy benefit managers (PBMs). I compare these companies with the Fortune 500’s ten pharmaceutical manufacturers and a separate survey of independent pharmacies.

The Fortune data remind us that many multi-billion dollar businesses profit as drugs move through the U.S. reimbursement and distribution system. We must recognize this complex system in order to tackle the price and affordability of drugs.

Here's our exclusive Drug Channels summary of the seven drug wholesalers, drugstore chains, and PBMs on the 2017 Fortune 500 list. See the methodology comments at the end of this article for help in interpreting these data.

Three additional drug channels companies appear in the broader Fortune 1000 list: Diplomat Pharmacy (#554), Fred's (#903), and Pharmerica (#914). Each of these three companies earned revenues below $5 billion. I excluded them from the analysis because of the large revenue gap compared with the seven included companies. 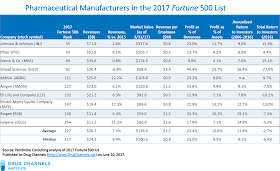 Consider how a single prescription can hypothetically be counted as revenue by four different Fortune 500 participants in the drug distribution and reimbursement system:
The flow of money and product is illustrated below in this chart from our 2017 Economic Report on U.S. Pharmacies and Pharmacy Benefit Managers: 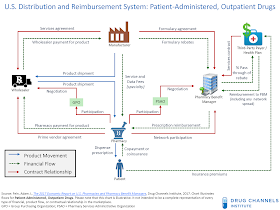 By contrast, manufacturers’ rebates to PBMs and other third-party payers do not flow through wholesale or retail channels within the U.S. distribution and reimbursement system. For brand-name drugs, revenues for wholesalers, pharmacies, and PBMs are therefore based on the Wholesale Acquisition Cost (WAC) list price, not the net selling price. I discuss the implications of this important distinction in Drug Prices, Manufacturer Rebates, and the Risk to Channel Economics.


When their profits are measured by Return on Sales (= Profit ÷ Sales), the profits of wholesalers, PBMs, and pharmacies are a small fraction of manufacturers’ profits. As you can see in the table above and chart below, Return on Sales (ROS) was in the low single digits for all companies in this group, regardless of their position in the channel (pharmacy, wholesaler, or PBM). In 2016, the average ROS for the drug channel group was 2.0%.

In 2016, the drug manufacturers’ average profit as a percentage of revenues was more than 10 times as large, at 23.4%.
OBSERVATION #3: When measured by Return on Assets, drug channels companies’ profitability looks much better.


ROS is a flawed measure of profitability for channel intermediaries due to the revenue double-counting. A more meaningful metric is Profits as a % of Assets, a.k.a., Return on Assets (ROA). When profits are measured by ROA, channel company profitability is much closer to that of pharmaceutical manufacturers.

ROA relates ROS to the balance sheet assets required to generate an income statement profit. The biggest part of a drug channel company's balance sheet is current assets (cash, product inventory, or accounts receivable). For example, the value of product inventories, accounts receivables, and cash accounted for more than 90% of the big three wholesalers’ current assets. (See Exhibit 60 of our 2016-17 Economic Report on Pharmaceutical Wholesalers and Specialty Distributors.) In contrast, the biggest assets of a pharmaceutical manufacturer tend to be long-term, such as intangible assets, goodwill, and physical plant, property, and equipment.

The profitability of companies in the drug channels universe looks much more attractive this way. In 2016, the group average was 4.6%. The ROA figures for drug channel companies now look closer to those of the pharmaceutical manufacturers, whose average profit as a percentage of assets was 10.6% in 2016. The manufacturer-to-channel ratio was slightly more than 2X for ROA. The chart below summarizes the average profit metrics.
[Click to Enlarge] 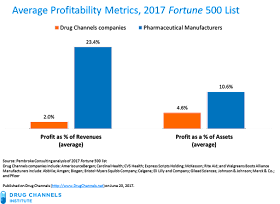 To measure the relative profitability of channel members, I like to compare gross profits with operating expenses. Gross profit reflects the value added by an intermediary in the distribution and reimbursement system. The ratio of gross profit to operating profits shows how effectively a channel intermediary converts gross profits from distribution into operating profits. Alas, the Fortune lack the data to compute this non-GAAP metric.
OBSERVATION #4: Independent pharmacies’ profitability is comparable to that of the largest public drug channel companies.


The 2016 NCPA Digest, Sponsored by Cardinal Health published 2015 financial and operating data submitted by pharmacy owners. It remains the only consistent source of independent pharmacy owners’ financial data. NCPA no longer publicly releases the detailed financial data from this report. (I presume NCPA is philosophically opposed to transparency.)

A little algebra plus some educated guesswork implies that average Return on Sales was 2.7% for independent pharmacies. Private pharmacies don't always manage based on the same return metrics as a public company. The independent pharmacy data, however, continue to show profits comparable to or exceeding that of the public companies.
OBSERVATION #5: In 2016, investors earned very poor returns both from drug channel companies and manufacturers.


Last year's stock market was very unkind to the pharma industry. Here are the average Total Return to Investors in 2016 as reported from Fortune’s list:
Both groups did much worse in 2016 than the S&P 500 index, which finished up about 10% for the year.
SOME TECHNICAL NOTES