Latest Data on Pharmacy Market’s Evolution: The Real Story Behind the Retail vs. Mail Battle

QuintilesIMS recently released Medicines Use and Spending in the U.S.: A Review of 2016 and Outlook to 2021. The report is an excellent, albeit often misinterpreted, resource for understanding the pharma market.

Below, I analyze the latest data on how pharmacy dispensing channels have changed over the past five years. Key insights:
Just about every media story inaccurately reported the QuintilesIMS data as “drug spending.” To tickle your inner wonk, I also provide a primer on how to interpret and understand what the QuintilesIMS data really mean.

The QuintilesIMS “Invoice spending” data reflect pharmacies’ “Purchases at Invoiced Prices,” which is how I will refer to the data. See my comments below for how you should properly interpret the QuintilesIMS financial numbers, which measure invoiced amounts paid to wholesalers by their pharmacy customers.

The chart below shows our analysis of growth in purchases and prescriptions by dispensing format from 2011 to 2016. 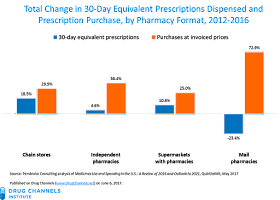 As you can see, prescription growth patterns differ significantly from the purchase volume growth trends.
The data show how the growth of specialty drugs is reshaping the pharmacy industry. Retail pharmacies that focus on traditional drugs account for an increasing share of the industry’s dispensed prescriptions but a decreasing share of drug purchases and revenues.

However, the data do not represent actual spending by any third-party payer. In fact, the data measure invoiced amounts paid to wholesalers by pharmacies, hospitals, and other healthcare providers. QuintilesIMS defines “invoice spending” to be “based on QuintilesIMS reported values from wholesaler transactions measured at trade/invoice prices and exclude off-invoice discounts and rebates that reduce net revenue received by manufacturers.”

Consequently:
One final comment: In Chapter 2 of our 2017 Economic Report on U.S. Pharmacies and Pharmacy Benefit Managers, I report on prescription revenues by dispensing channel. To generate these figures, I adjust the QuintilesIMS data by: (1) separating “Chain Store” prescriptions into those dispensed by chain drugstores versus those dispensed by mass merchants with pharmacies, (2) allocating the share of “Chain Store” prescriptions that were dispensed by independently owned franchise members to the Independent Pharmacy category, (3) adjusting for channel margins and wholesaler discounts, and (4) estimating prescription revenues, which are not reported by QuintilesIMS.