Time to update our exclusive annual analysis of pharmacist salaries. As always, we rely on the latest Occupational Employment Statistics (OES) data from Bureau of Labor Statistics (BLS).

In 2016, the average gross base salary for a pharmacist at a retail, mail, and specialty pharmacy topped $120,000—up 0.6% from the 2015 figure. Retail employment expanded, with the greatest growth at drugstores.

Though pharmacist salaries are growing, they are not keeping pace with those of other healthcare practitioners. That disparity should be troubling to every pharmacy school dean.

BLS and the State Workforce Agencies (SWAs) collaborate on the OES survey. BLS funds the survey and dictates its structure, while the SWAs collect most of the data. The OES survey categorizes workers by detailed occupations based upon the Standard Occupational Classification (SOC) system. For more on these data, see the OES FAQ page.

The “pharmacist” occupation code is 29-1051. Using these data, we identified pharmacists working at retail, mail, and specialty pharmacies by analyzing the following NAICS (North American Industry Classification System) industries:
Note that BLS computes the annual wage data by multiplying an hourly mean wage by a "year-round, full-time" figure of 2,080 hours. The data below show full-time, gross salary data. The wage data exclude bonuses and employer costs of nonwage benefits, such as health insurance and employer contributions to retirement plans. 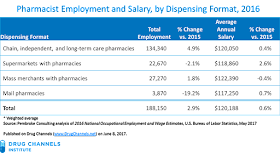 Here are my observations about the 2016 trends: 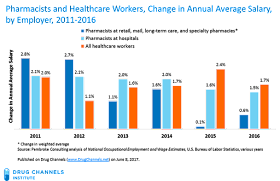 Note that the OES data exclude self-employed pharmacists and pharmacy owners. Based on industry survey data, the average pharmacist owning a single pharmacy earned about $200,000 in 2015 (the most recent year available). See New Data Show Prescription Profits Under Pressure at Independent Pharmacies . A pharmacy owner still makes more than an employed pharmacist—but the gap keeps shrinking.

The 2016 data are consistent with key trends that I highlighted in two recent Drug Channels analyses:
For 2016, 14 of the top 15 most highly paid U.S. occupations were in healthcare. Among all BLS-ranked occupations, Pharmacist was the 43rd most highly paid occupation, right behind Astronomer and Physicist. (Go to https://www.bls.gov/oes/current/oes_nat.htm and sort by the Annual Mean Wage column.)