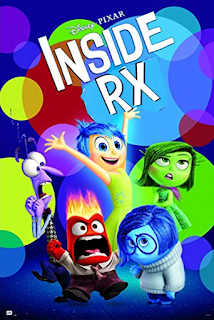 This innovative partnership is the latest attempt to offer direct-to-consumer discounts that pop the gross-to-net bubble—at least for uninsured patients. Below, I delve deep inside Inside Rx. I explain:
Depending on your position in the drug channel, you will feel either joy, sadness, fear, disgust, or anger as this new program rolls out. Please feel free to emote in the comments below.

EMOTIONS TO FEEL ABOUT INSIDE RX

1. Prescription prices for cash-pay patients will be less expensive than pharmacies’ list prices.

Retail pharmacies establish "usual and customary" (U&C) list prices for their prescriptions. That’s the price that a pharmacy charges to a cash-paying consumer. Pharmacies typically establish U&C prices that exceed the maximum expected reimbursement from any third-party payer. The pharmacy thereby eliminates the risk that it could be reimbursed less than what a third-party payer would have been willing to pay. Unfortunately, U&C prices often end up making uninsured patients pay more than the discounted price negotiated by a PBM. Ewww.

Patients should benefit from inside Rx because rebates are being passed directly to patients at the point of sale. As I told The New York Times last week when the deal was announced:


…the program “is a positive development because the system is set up to soak the poor, and this is a way to pass some of the rebates down to the point of sale.”

BTW, that Times article Express Scripts to Offer Cheaper Drugs for Uninsured Customers was the best mainstream media article on the program.
2. Express Scripts and the eight manufacturers will benefit from new volume and revenues.

A manufacturer obviously receives no revenue from a prescription that does not get filled. Inside Rx enables the eight participating manufacturers to offer the advantage of rebates to uninsured patients. Consequently, manufacturers gain new volume from prescriptions that otherwise would have been abandoned.

I also speculate that in some cases, a manufacturer’s net revenue per prescription from this program will exceed net revenues from other third-party payers. The Inside Rx press release states that “patients can save an average of 34 percent off of the drug's typical cash price.”

More than half of the brands in the program are in the highly commoditized diabetes category. For these products, the manufacturers’ net revenues per prescription have been growing very slowly. (See the charts in Novo Nordisk Sheds New Light on PBM Rebates, the Gross-to-Net Bubble, and Warped Channel Incentives.) The gap between gross (list) price and net price (after rebates) is very large. Eli Lilly, for instance, revealed that its average discounts for 2016 were 50% off list price. (See our March 2017 news roundup.)

Meanwhile, Express Scripts benefits by becoming a PBM for cash-pay prescriptions. It financially benefits in at least three ways from Inside Rx:

The program includes 40,000 pharmacy locations. (View the lists here: https://insiderx.com/#ParticipatingPharmacies) It appears to include only national and regional retail chains (supermarkets, mass merchants, and chain drugstores). Curiously, Express Scripts’ own mail pharmacies are also not participating in the network.

As with other narrow network designs, pharmacies’ willingness to pay the program’s “small fees” will reduce their profits and reduce drug costs. See Chapter 7 of our 2017 Economic Report on U.S. Pharmacies and Pharmacy Benefit Managers.

For now, there are no independent pharmacies in the network. I suspect many pharmacy owners will say to GoodRx: “Congratulations San Francisco, you've ruined pharmacy!”
4. The drug list includes some unusual suspects.

There are some surprises among the drug list at https://www.goodrx.com/brand.

One drug has a generic equivalent (Crestor). Another has an over-the counter comparable product (Nexium). Good Rx told me that its search engine will default to the generic version of Crestor and provide a consumer notice for Nexium, but people can still opt to get the brands at the Inside Rx price.

Some of the diabetes products are among the excluded medications on Express Scripts’ 2017 Preferred Drug List Exclusions. These include Apridra, Onglyza, and Novolin. Hmmm.
5. For now, CVS Health’s Reduced Rx program significantly lags the Inside Rx program.

In March, CVS Health and Novo Nordisk announced Reduced Rx, a program that also provides some insulin products at low cash prices to uninsured patients. Reduced Rx is similar to Inside Rx in that both operate as a PBM-backed discount program that passes rebates directly to patients at the point of sale.

There are two key differences. One, the Reduced Rx program is available at all pharmacies in the Caremark network, including independents. Two, Reduced Rx includes only three Novolin products.

I expect that CVS will expand its program to compete with Inside Rx. Other PBMs, especially the OptumRx business of UnitedHealth and the newly energized Prime Therapeutics, will likely follow their two larger peers into this market.
Overall, Inside Rx is a net positive for consumers, in part because it addresses the gross-to-net challenges facing the uninsured and patients with deductibles.