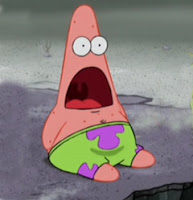 Covered entities are generating billions in untraceable profits from this fast-growing program. Hospitals, which make up the vast majority of 340B purchases, should be required to account clearly for the billions the program provides them.

This growth should make everyone—especially the manufacturers providing the discounts—pay much closer attention to what’s going on.

Apparently, basic data on the 340B Drug Pricing Program are now on double-secret probation.

Apexus, the HRSA-designated Prime Vendor, has historically provided annual data on discounted purchases made under the 340B program. This year, Apexus declined my request for the 2016 figure.

I therefore pestered Captain Krista Pedley, director of the Office of Pharmacy Affairs, and her staff for the data. After two months and many emails, they finally relented and gave me the figure.

Yes, dear readers, you are the first to see the 2016 numbers.

The chart below shows the startling growth in the purchases made under the 340B Drug Pricing Program, all at discounted contract prices. 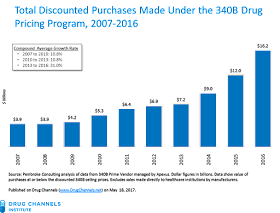 Note that the $16.2 billion figure includes only indirect sales made via wholesalers. The data therefore understate total 340B purchases, because they exclude an unknown amount of manufacturer sales made directly to healthcare institutions. I estimate that Apexus captures at least 90% of 340B sales.

The Apexus figures include purchases at or below the deeply-discounted 340B ceiling prices. To compute 340B’s share of the total U.S. market, the appropriate denominator must therefore also be discounted purchases.

According to QuintilesIMS Health’s new Medicines Use and Spending in the U.S.: A Review of 2016 and Outlook to 2021, “net spending” was $323.1 billion in 2016. QuintilesIMS defines “net spending” as “company recognized revenue after off-invoice discounts, rebates and price concessions are applied,” so it is an appropriate denominator. 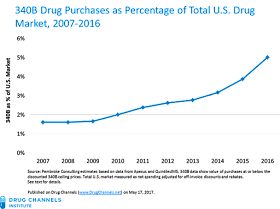 Many 340B lobbyists still claim that the 340B Drug Pricing Program amounts to "only 2%" of total U.S. drug purchases, but that hasn’t been mathematically true since 2010. Remember our Drug Channels philosophy, courtesy of the late senator Daniel Patrick Moynihan: "Everyone is entitled to his own opinion, but not his own facts."

It makes logical sense that 340B is gaining share. The data show that 340B purchases grew by 153% from 2010 to 2016. By contrast, the QuintilesIMS data show that the net value of the total U.S. market grew by only 20% over the same period.

Hospitals accounted for more than 85% of all 340B purchases. What happened to the billions collected under the program?

Some hospitals have published high-level descriptions of how they spend 340B funds, but none of the articles fully accounts for the billions of dollars in 340B profits. Much more transparency is required, because the dollars are very large and growing very quickly.

Apexus, which is a wholly-owned subsidiary of Vizient, is also profiting from this spectacular growth. Apexus earns admin fees that are computed as a percentage of 340B purchases, so its revenues are soaring, too.

Many covered entities legitimately require additional financial support. Yet there are also large, profitable, well-funded health systems that can use 340B profits in ways that are not linked to the drug discount program’s proper purpose.

I have outlined my recommendations for fixing the program in What I Told HHS Secretary Tom Price About the 340B Drug Pricing Program. Let’s hope that HRSA and Apexus can stop being so secretive about this government program. Given the program's rapid growth and its channel distortions, Congress urgently needs to refocus the program on genuine safety-net providers and financially needy patients.