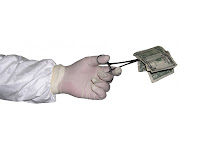 Yesterday’s article on the astounding size and growth of the 340B Drug Pricing Program generated a lot of controversy. ICYMI: The 340B Program Hits $16.2 Billion in 2016; Now 5% of U.S. Drug Market

Today, I provide some context by showing how the program has taken over the hospital market.

Most 340B purchases are made by hospitals. My exclusive number-crunching below reveals that hospitals now receive discounted 340B pricing on more than 50% of their drug purchases.

Curiously, the value of hospitals' uncompensated care has been declining while 340B purchases have been soaring.

Consequently, 340B has infiltrated more than half of the hospital market. In 2016, we estimate that the 340B share had risen to more than 50% of purchases. (See chart below.) The assumptions behind the calculations appear in the next section. 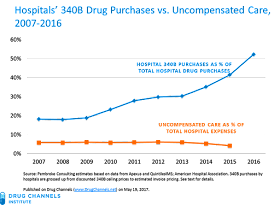 The 340B program is highly controversial, partly because the 340B legislation does not specify or restrict how covered entities should utilize funds generated by the program. As a point of comparison, uncompensated care as a percentage of hospitals’ total expenses has declined, from 6.1% in 2012 to 4.2% in 2015. (source) The total value of hospitals' uncompensated care has also declined, from $45.9 billion in 2012 to $35.7 billion in 2015. Fascinating.

Some of the program's defenders seem to forget that most hospitals have tax-exempt, i.e., nonprofit, status in exchange for providing "community benefits." That does not mean that a hospital has an operating loss. Some are quite profitable in the sense that revenues exceed expenses. Here's a useful overview from Health Affairs: Nonprofit Hospitals' Community Benefit Requirements.

See What I Told HHS Secretary Tom Price About the 340B Drug Pricing Program for a summary of the channel distortions caused by the 340B program's takeover of the hospital market.