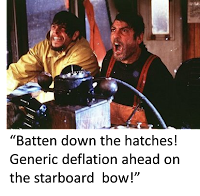 In its latest earnings report, AmerisourceBergen gave a downbeat assessment of the challenges confronting its drug distribution businesses. It also unexpectedly reduced financial forecasts for both its 2016 and 2017 fiscal years. In typical public company fashion, the blame was placed on non-nautical “headwinds.”

Fortunately, ABC’s management team didn’t leave us high and dry on the market’s evolution. Below, I rely on its latest quarterly earnings conference call to examine generic deflation, pharmacy consolidation, sell-side discounts, and the specialty market.

McKesson and Cardinal Health are facing similar challenges in their drug distribution businesses. So, hoist up your mainsail as we cast off for some nautical nonsense about the future of pharmaceutical wholesaling.

As always, I encourage you to dig for treasure in the original company sources for yourself. Here are direct links to materials for AmerisourceBergen’s second fiscal quarter (and the first calendar quarter) of 2016:
GENERIC INFLATION GETS DECOMMISSIONED

The unexpected generic drug inflation of 2013-2014 was generally good for pharmaceutical wholesalers. As I describe in Section 4.6.2. of our 2015–16 Economic Report on Pharmaceutical Wholesalers and Specialty Distributors, wholesalers benefited from generic price increases, which are typically passed onto their pharmacy customers. Whenever a wholesaler’s mark-up remained constant, gross profit dollars increased along with drug costs. Note that generic inflation also increased wholesalers’ revenue growth, which had been expected to decline due to generic deflation.

Here’s a key comment from the call by Tim Guttman, CFO and executive vice president at ABC:


“While generic inflation has been nominal, the rate of generic drug deflation is slowly increasing and is higher than the level we previously expected in fiscal 2016 and expected to get slightly worse by year-end. This is driven in part by the increased supply of generic product in the channel. While we are protected from inventory losses on deflationary products, it's difficult to continue to earn the same gross profit dollars on decreasing prices.”

George Barrett, CEO of Cardinal Health, made similar comments on Cardinal’s most recent earnings call. Barrett also highlighted other generic trends that are working against wholesalers, including: relatively fewer generic launches compared with historical trends; an increase in new generic approvals by the FDA; and a year-over-year slowdown following the big gains from the new generic purchasing consortia that I describe in Why Walmart Is Finally Joining McKesson for Generic Purchasing.

Was this all really a surprise? We’ve all known that the generic wave is ending, which means that the growth rate of generic substitution will slow in coming years. As for the 2013-14 inflation, it’s been clear for some time that the bubble was popping:
Section 6.1.6. of our 2015-16 wholesaler report is even titled “Risks to Wholesalers’ Generic Profits.” Just sayin’.

The pharmacy industry continues to consolidate, and market share is becoming more concentrated. (See our list in The Top 15 Pharmacies of 2015.) Consolidation and acquisitions, however, generally hurt wholesalers’ margins, because the acquiring companies consolidate their buying power.

ABC won big from last year’s round of M&A—but that victory came at a cost. As Steve Collis, president and CEO of ABC, explained on the call:


“We do expect to grow our revenue slightly above the market. And then because we have a strong association or weighting towards those larger customers and because of the mixes that we see, we don't expect to be able to keep our gross profit growth up with that revenue growth.”

Put more simply: ABC earns the lowest profit margins from its largest customers, which are growing faster than the market. For example, I estimate that in its 2015 fiscal year, Earnings Before Interest and Taxes (EBIT) for ABC’s Walgreens Boots Alliance (WBA) relationship was only 0.4%. Ouch.

Concurrent with its earnings release, ABC unexpectedly announced that both its pharmaceutical distribution contract with WBA and its Walgreens Boots Alliance Development (WBAD) relationship had been extended to 2026. (Read the press release.) The revised agreement requires ABC “to make certain working capital investments in the relationship and will proceed with additional capital investments in its distribution network.”

On the call, it was revealed that means: (1) higher inventory levels (and therefore more invested capital for ABC) to “maximize” service levels for WBA, and (2) more favorable payment terms for WBA (and therefore a less favorable cash-to-cash cycle for ABC).

Once WBA completes its Rite Aid acquisition, ABC’s revenues will soar, but its profits will come under further pressure. Don’t forget that WBA owns about 15% of ABC and already has one seat on its board, as I describe in Walgreens Boots Alliance Gets Busy with OptumRx and AmerisourceBergen Deals.

Express Scripts, ABC’s second-biggest customer, renewed its agreement for only one year, through September 2017. For its 2015 fiscal year, we estimated that the combined Express Scripts-Medco business was $22.8 billion, or about 17% of ABC’s total corporate revenue. We estimate, however, that the EBIT of this relationship was only 0.2% for ABC.

Wholesalers’ sell-side margins for brand-name drugs are generally negative, so they are sometimes called cost-minus pricing or a cost-minus discount. That’s because the wholesaler may sell a product for less than the manufacturer’s list price or less than a different measure of cost. Note that cost-minus pricing does not necessarily mean that a wholesaler sells the product below its own acquisition cost.

Here’s how Collis summarized the situation:


“So all of these new innovative products we expect to get a fair return on. And that's a discussion we're having with our customers and definitely a discussion we're having with manufacturers as well. Now the reality is that the sell side takes time to catch up with the buy side. And by sell side, we mean the contracts that we have with providers.”

Here’s my translation: Collis is suggesting that wholesalers should (will?) provide smaller sell-side discounts to its customers so ABC can get “a fair return” on those sales. Hope John Hammergren and George Barrett were listening to ABC’s call!

NO SHELTER FROM THE SPECIALTY MARKET STORM

Wholesalers’ margin challenges relate directly to the changing pharmaceutical industry. Specialty drugs are driving the industry’s revenue growth and market structure, while traditional brand-name drugs shrink. The next-generation pharmaceutical blockbusters will primarily be specialty products that are aimed at smaller patient populations than were the mass-market traditional drug blockbusters of yesteryear. (See Our 2020 Outlook for Specialty Pharmacy Revenues.)


“As more lower margin branded specialty drugs shift primarily to hospitals and specialty pharmacies through full-line distribution in our drug company, these revenues do not currently provide enough gross profit dollars to overcome the decline in generic drug gross profit.”

Later in the call, Collis added:


“We have a big alternate care customer base. We have a big health system and hospital GPO customer base and all of these customers need to really move along. And as we get through the contracting phase, it is our strong intention that we will make a profit on specialty drugs and innovative therapies, whatever the site of care is.”

Put another way, wholesalers are better positioned for provider-administered specialty drugs covered under the medical benefit.

Until recently, AmerisourceBergen had been valued at a premium to both the S&P 500 index and its peers. Over the past year, however, investors have yelled “Abandon ship!” ABC’s stock is down 34% compared with a 3.5% decline in the S&P index. Arrr, ye scurvy Wall Street sea dogs!