Why Walmart Is Finally Joining McKesson for Generic Purchasing

Well, pierce my ears and call me drafty. Yesterday, Walmart announced that it will jointly source generic drugs to McKesson, its long-time brand-name drug supplier. Read the press release.

Below, I outline why this long-expected deal makes sense for both companies. Walmart finally bowed to the inexorable economics of generic purchasing, while McKesson captured a much-needed partner that it had been aggressively chasing.

The deal also formalizes an intriguing alignment between the three largest wholesalers, the three largest pharmacy benefit managers (PBMs), and the four (soon to be three) largest retail chains. See what you think about my summary chart.

1) Walmart lacked the scale of the new generic power buyers.

In section 3.3.5 of our 2016 Economic Report on Retail, Mail, and Specialty Pharmacies, I describe the changing generic sourcing relationships between wholesalers and large pharmacies. As generics come to dominate pharmacy dispensing, those pharmacies and wholesalers with below-average acquisition costs will be the best positioned to succeed.

We estimate that in 2015, the four largest buyers accounted for 80% of total U.S. generic drug purchases from manufacturers. Note that these estimates exclude the impact of mergers and acquisitions in 2015 and the newest Walmart news. 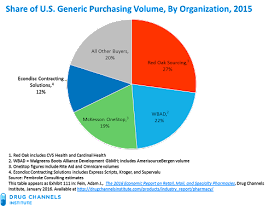 The press release does not mention OneStop. Instead, it states that the companies “will collaborate on sourcing generic pharmaceuticals for their respective U.S. operations, adding scale and value for both companies.” Translation: Walmart is not ceding all authority to McKesson.

2) Walmart is finally surrendering to the new realities of drug wholesaling.

Wholesalers’ biggest customers have historically purchased generics directly from manufacturers rather than through the wholesale channel. However, the reduced acquisition costs from these retail-wholesale purchasing relationships have encouraged other pharmacies to shift generic purchasing to wholesalers. Examples include Publix (AmerisourceBergen), Albertsons (McKesson), and OptumRx (Cardinal Health).

These arrangements are increasing the wholesale market’s size, by shifting generic volume to the wholesale channel. They also add heft to the generic power buyers shown in the chart above.

Despite Walmart’s size, it was rapidly becoming an also-ran in generic buying. We estimate that its pharmacy business grew slowly in 2015. The two factors that propelled its sales—an industry-leading generic drug discount program and aggressive participation in Medicare Part D preferred network arrangements—have already been matched by other pharmacies. Don’t forget that Walmart has been having profitability problems in its pharmacy business, as I discussed in What’s Behind Walmart’s Pharmacy Profit Warning?

Before yesterday’s announcement, Walmart was one of the last big retailers to purchase generic drugs directly from manufacturers. Its estimated $2.5 billion in generic purchasing volume will move from the “All Other Buyers” category in the chart to a new McKesson/Walmart partnership slice.

By extending its distribution agreement with Walmart, McKesson locks down the purchasing volume of its third-biggest customer. This partially offsets McKesson’s bad luck—it had found itself on the wrong end of multiple recent drug channel consolidations:
McKesson’s profits from the Walmart deal will not be as great as its profits from retailers that buy via OneStop. Since the companies will “collaborate” on generic sourcing, I presume that Walmart will share in more of the economics than would a typical customer.

I have previously mentioned the so-called Rule of Three and Four, which was coined by Bruce Henderson, founder of Boston Consulting Group. He posited that “a stable, competitive industry will never have more than three significant competitors.”

We now have three large wholesalers, three large PBMs, and three large retail pharmacy chains. Check out the big customer relationships, most of which are locked up in multi-year arrangements between wholesalers and their customers. 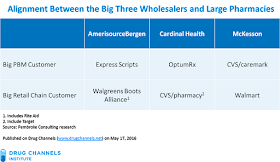 Per our list of the largest pharmacies, the wholesale customers—five companies, post WBA-RAD—shown in the chart accounted for almost two-thirds of U.S. prescription dispensing revenues. Hmmm.

These alignments have significant implications for manufacturer channel strategies, because wholesalers are becoming virtually impossible to displace for traditional brand-name and generic products.

Specialty drugs are another story, which we’ll consider in my next article.