The three big PBMs—Express Scripts, the Caremark PBM business of CVS Health, and the OptumRx business of UnitedHealth Group—all vied for this $4.9 billion contract. Luckily for us, the CalPERS evaluation process was made public.

Below, I peek into the bidding documents to shed light onto each PBM’s drug trend projections and pricing strategies. As you will see, there are significant differences in how each company approached the CalPERS contract—and in what each PBM forecasts for pharmacy benefit spending increases through 2021.

The three biggest PBMs—CVS Caremark, Express Scripts, and OptumRx—bid for the CalPERS contract. As we describe in Section 5.1. of our 2016 Economic Report on Retail, Mail, and Specialty Pharmacies, nearly three-quarters of all prescription claims are now processed by these three companies:

You can find the public bidding materials under Item 10 of the May 17 Pension and Health Benefits Committee Agenda webpage.

The Comparison of Solicitation Proposals (Attachment 5) summarizes the committee’s qualitative scores for the three PBMs. There were five major categories: firm’s capabilities; management plan; work plan; staffing plan; and financial plan. Each category was divided into sub-categories that were ranked on a scale of 1 star (inadequate) to 5 stars (excellent or outstanding).

Bottom line: The goofy star ratings concluded that the PBMs were comparable. The decision, therefore, came down to dollars and cents.

BTW, it was a good week for OptumRx, which also won the Texas Employees Retirement System (ERS) PBM contract away from Caremark.

The CalPERS cost projections for 2017-2021 shows each PBM’s estimates for total projected cost.

Along with the bids, each PBM provided a per-member, per-month (PMPM) projection, which excluded member copayments and coinsurance. Using these data, we computed the drug trend—the year-over-year changes in CalPERS’ drug spending. Note that changes in spending are affected by (1) changes in unit costs and (2) changes in utilization. For background, see Chapter 4 of our 2016 pharmacy report.

The chart below summarizes the results by PBM. 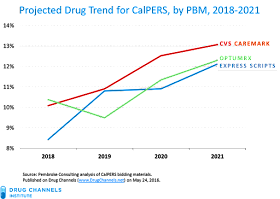 Here are three key insights from these projections
These results may not be fully generalizable. For example, we don’t have the details on the benefit plan design behind these projections. Nonetheless, the bids reveal a lot about how the big PBMs are competing during a busy PBM selling season. Damn you, vile RFP!