I crunch the prescription drug forecasts below. In 2013, prescription drug spending growth was again slower than the growth in total U.S. spending. Growth will accelerate as insurance coverage expands, the generic wave ends, and newer specialty drugs launch. By 2023, the U.S. will spend nearly $500 billion on drugs.

Despite this impressive growth, outpatient prescription drugs will account for less than one of every 10 U.S. healthcare dollars. Hospitals and physicians will remain at almost 60% of U.S. healthcare spending—or about six times as much as spending on pharmaceuticals.

Expenditure (spending) data differ from that of pharmacy revenues, manufacturer sales, and provider purchases. NHE totals are net of manufacturer rebates, so the reported figures are lower than pharmacies’ prescription revenues and IMS Health data. The NHE data also do not measure total U.S. spending on prescription drugs, because these data exclude an indeterminate amount of inpatient spending on pharmaceuticals. Thus, U.S. drug spending in the NHE is roughly equivalent to total outpatient pharmacy revenues minus manufacturer rebates.

The chart below presents our analysis of the most recent forecasts for annual growth in total national healthcare expenditures and outpatient prescription drugs. 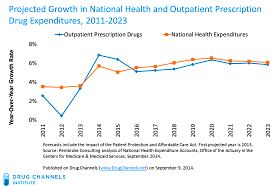 Here are the other key components of the forecast period:
CMS again emphatically rejected the notion that the (PPACA)Affordable Care Act has led to lower spending, noting:


“The recent period is marked by a four-year historically low rate of health spending growth, which was primarily attributable to the sluggish economic recovery and constrained state and local government budgets following the 2007–09 recession. In addition, increases in cost sharing for people with private health insurance and a few notable one-time factors, such as the effect of having several top-selling brand-name drugs lose patent protection, contributed to the slow overall spending growth.”

For more on the macroeconomy angle, see my summer 2013 data crush in A Very Cool Look at Healthcare Spending and the Economy.

Spending on outpatient prescription drugs remains a small part of overall U.S. healthcare expenditures. The chart below shows the three largest categories, which collectively accounted for about two-thirds of total U.S. spending in 2013. 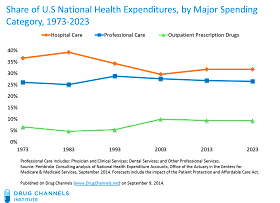 Throughout the next 10 years, more than half of the expenditures will come from the two largest categories—hospital care and professional services (from physicians, dentists, and other professionals). In 2013, these categories account for 58.6% of U.S. healthcare spending. In 2023, CMS projects that they will be essentially an unchanged share, at 58.3%. Annual U.S. expenditures on hospital care and professional services will grow to $3.0 trillion (+78%) by 2023.

Despite generating headlines, outpatient spending on prescription drugs accounted for only 9.4% of total U.S. spending in 2013. Drug spending is projected to remain at a roughly stable share over the next 10 year.

So, when will the congressional hearings on hospital pricing start? Yeah, I didn’t think so.

P.S. If you're brave and/or wide awake, click here to watch a 60 minute video of those wascally CMS economists describing the forecast.
Adam J. Fein, Ph.D. on Tuesday, September 09, 2014