Inside Express Scripts’ Narrow Network Strategy—and How It Beat Walgreens

Becker explained Express Scripts' pharmacy network strategy, noting that 15% to 20% of the PBM’s claim volume now goes through a narrow network. He also revealed some previously-undisclosed insights into how Express Scripts outfoxed Walgreens during their 2012 imbroglio.

I highly recommend this webinar to anyone interested in the PBM/pharmacy/patient dynamics behind narrow networks. Excerpts below. 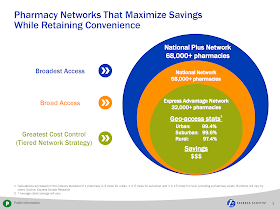 The webinar also includes a fascinating review of the 2012 Express Scripts-Walgreens dispute, including a review of Express Scripts' major patient communication actions. Becker presents compelling evidence of why consumers didn’t mind losing access to Walgreens:
Here’s how Becker describes what happened to the 10% of Walgreens-only patients:


“[O]ut of those 10% people that were exclusively using Walgreens, about 3% of them actually ended up calling into the Express Scripts Call Center. The rest of them were able to manage through the www.expressscripts.com website, or could just literally drive across the street in some cases and find another pharmacy. And out of those 3% that did have to call in and find additional support, half of them were able to get through our automated voice response system and get their questions answered that way and didn’t even need to speak to a live agent. The other half did have to speak to a live agent and that live agent was able to give them the necessary tools and information to find an additional pharmacy close by that was convenient for them.”

Fun stuff. Check it out.