Express Scripts has just released the latest edition of its long-running Drug Trend Report. Start with the Table of Contents. Be forewarned: the report is now a nearly unusable series of more than 100 web pages. (See my tech-whining below.)

If you look hard enough, you’ll find valuable insights into our changing industry, along with data on 2013’s drug trend (the change in prescription drug expenditures of a third-party payer). Here are my highlights:
Tomorrow, I’ll look at Express Scripts’ tough talk on hepatitis C drug prices and how this new report illustrates PBMs’ challenges in controlling these costs.

Drug trend—the change in prescription drug expenditures of a third-party payer—has two primary components:
Per the new report’s Methodology page, Express Scripts measures drug trend as “the rate of change in plan costs, which include ingredient costs, taxes, dispensing fees and administrative fees. Rebates are not included as a component of cost.” (Emphasis added.)

Other PBMs use different definitions, as I noted last year in Is Caremark Really Better Than Express Scripts At Managing Drug Trend? I’ll update my comparison after other PBMs release their reports,.

Observations:
Although Express Scripts has changed its methodology over the years, I assume that it’s sufficiently consistent to create the following chart showing drug trend since 2002. The chart updates Exhibit 35 (page 46) of the 2013-14 Economic Report on Retail, Mail, and Specialty Pharmacies. 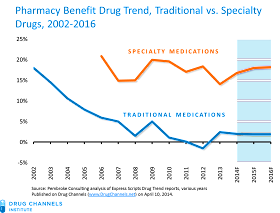 Just my $0.02, but the new report’s technical presentation trended down this year.

Previously, readers could download the whole report. In fact, Express Scripts has helpfully provided a page for downloading all previous reports.

This year, Express Scripts broke their long, dense trend report into more than 100 individual web pages. I hope you have some time, because each page must be loaded separately. While it’s easier to link to specific sections, you will find it essentially impossible to read or search the report quickly.

The site is also slow, buggy, and counter-intuitive.
Please, Express Scripts: Provide a PDF download option, like everyone else. I confidently predict an uptick in my mood trend.