Just in time for the Phillies’ Opening Day, the Medicare Payment Advisory Commission (MedPAC), an independent agency that advises Congress on the Medicare program, just wound up and delivered its latest Report to the Congress: Medicare Payment Policy (March 2014). As always, this annual box score report is in a league of its own. It provides an invaluable Medicare Part D status report, including stats on program design, enrollment trends, benefit design, costs, and prices.

In Chapter 14 (starting on page 353), MedPAC calculated the share of pharmacies listed as “preferred” by the largest Part D Prescription Drug Plans (PDPs). (The key data are reproduced below.) For 2013, MedPAC found that:
Although CMS withdrew its attempt to strike out preferred networks, I expect that the agency will try again. As I explain below, MedPAC’s analyses and recent letter to CMS provide a game plan for preferred networks’ future. Meanwhile, manufacturers should catch up on their spring training with Pharmacy Benefit Networks: The Big Squeeze.

If you are unfamiliar with preferred networks in Medicare Part D (or just want a quick refresher), check out the Drug Channels play-by-play:
MONEYBALL

Using all-star data unavailable to mere mortals like me, MedPAC computed the average share of pharmacies that a plan listed as preferred in its lineup. (Note that MedPAC analyzed 2013 data, while our recent articles have examined 2014 data.) Here’s what it found for 2013: 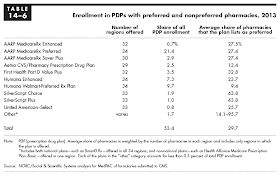 Per my color commentary, CMS drafted far-reaching revisions that would have effectively killed preferred pharmacy networks. CMS was forced to scratch those plans and hit the showers.

In MedPac's letter criticizing the proposed changes, it suggested three possible fixes to preferred networks:
The preferred pharmacy boom has taught us a clear lesson: If PDPs build it, then seniors will come. Will CMS try for another at bat?