As I document below, 2013 drug trend was positive and higher than Express Scripts’ forecast for three major traditional drug therapy classes, none of which had a major generic launch. Express Scripts blamed the higher-than-expected trend on manufacturers’ drug pricing.

Given Express Scripts’ difficulty in projecting traditional drug trend for therapy classes without new generic launches, the tough talk may be premature. Read on and see if you agree.

Forecasting is very hard, especially about the future. Those of us who live by the crystal ball often eat broken glass. Nonetheless, the gap between Express Scripts’ projections and this year’s results surprised me.

The table below compares the October 2013 forecast with actual 2013 results, by therapy class. 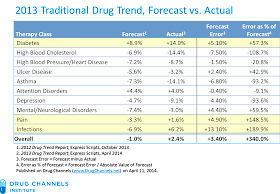 For three other therapy classes, however, drug trend was positive and higher than the forecast. Express Scripts explains these discrepancies by pointing the finger at manufacturers:
A FAILURE OF LEVERAGE?

My question: If the biggest PBM was unable to control unit costs without generic launches, how will it control the costs of new specialty drugs?

Consider the diabetes category, which accounted for 13.3% of traditional drug spending in 2013.

Express Scripts estimates that diabetes drug costs could be cut in half by eliminating “pharmacy-related waste.” It defines waste as “using higher-priced medications when more affordable, clinically equivalent alternatives were available” and “using the most cost-effective and clinically appropriate pharmacies, including narrower networks of retail pharmacies, home delivery and specialty pharmacies like Accredo.”

Yet these apparently large savings opportunities, in the biggest category of traditional drug spend, could not be contained in 2013. As a result, 2013 diabetes trend was 14.4%, compared with the 8.9% forecast.

HOW MUCH SHOULD MANUFACTURERS WORRY?

Think about the diabetes example as you read Dr. Miller’s comments in Bloomberg’s Express Scripts Raises Pressure on Gilead for Drug Price:


“Gilead could have a great year this year and lose all its market share a year from now,” Miller said. “The FDA has fast-tracked several other medications and we believe early 2015 is when there will be competitors in the marketplace.”

“The companies that will be second and third to the market here will have to play catch up,” Miller said. “We could shift the market share as soon as a competitor comes out. We need to start a national debate on fairness in drug pricing.”

Wow, that’s pretty tough talk. Per Express Scripts and the Inevitability of Formulary Exclusion, Express Scripts has shown that it is willing to exclude products from its national formulary. Is Express Scripts really ready to lower the boom on Gilead’s highly effective new therapy? And if they do, will it work?