EXCLUSIVE: For 2014, more than 70% of Medicare Part D plans have a preferred pharmacy network

Today, Medicare Part D kicks off its open enrollment period. Through December 7, America’s seniors can keep their current plan or switch to a new one. But the big story is the narrow network boom.

In 2014, preferred pharmacy networks will dominate Part D. There will be 56 plans with a preferred network, up from only 16 plans in 2013. Our analysis reveals that 72% of the nearly 1,200 regional prescription drug plans (PDP) have a preferred network. By the beard of Zeus!

When the first enrollment data are released in January, I predict that a majority of seniors will have chosen a PDP with a preferred pharmacy network.

Read on for our exclusive look at the 2014 Part D landscape, which includes insights on the major health plans behind the PDPs. As always, Drug Channels brings you the news—so you don't have to get it yourself.

KIND OF A BIG DEAL

In an open pharmacy network, a consumer’s out-of-pocket costs and copayments are identical regardless of which pharmacy in the retail network dispenses the prescription.

In a preferred network, consumers choose any pharmacy in a plan’s network, but get financial incentives to use the subset of preferred pharmacies that offer lower costs or greater payer control. Thus, the consumer’s out-of-pocket expenses will be higher at a non-preferred pharmacy.

The Part D preferred pharmacy network wave began in 2011, when Humana and Walmart launched their first plan. As I wrote at the time, it was An Inevitable Surprise for Pharmacies and PBMs.

In 2013, more than four out of ten seniors are enrolled in a Medicare Part D PDP with a preferred pharmacy network design. See Final 2013 Part D Data: Preferred Pharmacy Networks Still Win Big, But CMS is “Concerned.” A May 2013 survey found seniors in these plans are satisfied with their pharmacy choices.

CMS has questioned these networks, but its recent study clearly demonstrates the cost savings. See New CMS Study: Preferred Pharmacy Networks are Cheaper (Except When They’re Not). These cost savings come from reduced pharmacy profit margins, because a pharmacy typically pays a per-prescription fee to be preferred in a Part D plan’s network.

For more background, see “The Narrow Network Revolution,” starting on page 115 of the 2012–13 Economic Report on Retail, Mail, and Specialty Pharmacies. Manufacturers can prepare for these networks by reading Pharmacy Benefit Networks: The Big Squeeze, my article in the May 2013 edition of Pharmaceutical Executive.

60 PERCENT OF THE TIME, IT WORKS EVERY TIME

This year, I went the full wonky: I dug into the raw CMS data files. You can replicate my analysis using the Medicare Plan Finder database and the 2014 PDP Landscape Source Files (v.09.30.13).

My evaluation includes only stand-alone PDPs. I eliminated the following plans from the sample:
I included plans placed under sanction as of September 3, 2013. CMS provides information for these plans, but they can’t accept new enrollees. All of these plans are either the SilverScript PDPs, offered by CVS Caremark, or the SmartD Rx PDPs, which were acquired by Express Scripts.

My final sample included 95 plans operating 1,169 regional PDPs. Seventeen plans are being offered in all 34 regions, for a total of 578 PDPs (=17*34). The other 78 plans are operating in anywhere from 1 region to 33 regions, and account for 591 regional PDPs.

Preferred pharmacy networks dominate the 2014 PDP landscape. There are 56 plans with preferred networks, up from only 16 plans in 2013. These plans operate 841 regional PDPs, which account for 72% of the total regional PDPs for 2014. 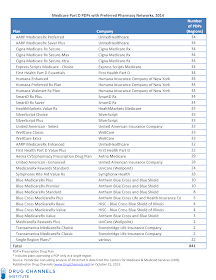 2014 highlights:
The preferred networks include 20% to 50% of all retail pharmacies. Many of these networks include both chain drugstores and independent pharmacies. In a future article, I’ll look at the pharmacy networks behind the major plans. (UPDATE: See Walmart Plays to Win in 2014 Part D Preferred Networks, while CVS and Rite Aid Lag.)

We’ll know preferred networks' popularity when the enrollment data are released, in February. Until then, you stay classy, Drug Channels.