When the Walgreens-Alliance Boots deal was announced, in June 2012, Walgreens projected $100 million to $150 million of combined first-year synergies.

Last week, Walgreens surprised everyone by reporting $154 million of first year “net synergies” with Alliance Boots. The company now projects combined 2014 fiscal year synergies to be $350 million to $400 million. See the highlights below, along with a special video explaining how Walgreens Boots Alliance Development (WBAD) GmbH got its name.

If the companies continue to outperform their synergy targets, expect follow-on deals to create global purchasing scale. According to Dow Jones, the next noteworthy deal might be McKesson’s acquisition of Celesio.

Walgreens continues to project $1 billion in synergies by 2016. The 2016 target represents about 1% of pro forma 2016 pharmacy, general merchandise and indirect purchasing volume. 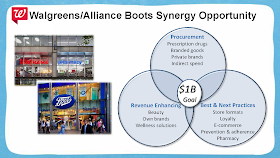 Recall that the AmerisourceBergen deal didn’t happen until two months after the presentation above.

The search for synergy is being led by Walgreens Boots Alliance Development (WBAD), the Swiss joint venture that Walgreens and Alliance Boots formed in August 2012. Given a $1 billion target, the acronym WBAD is pronounced “We Bad” for a reason. (See the video below.)


Robert P. Jones: Thanks for the questions. I wanted to ask you about the ramp of synergies, they are going to see you’re calling for $350 million to $400 million in fiscal 2014. On the generic procurement side specifically, I was wondering if you guys could comment on whether or not the re-contracting with your generic manufacturers’ kind of where you are in that process, is that close to complete. And then as it relates to that, how should we be thinking about the ramp on the generic procurement side specifically? Is that something you expect within the overall bucket of synergies to come in a little bit faster or is that kind of pacing along with the other synergy areas of synergies?

Gregory D. Wasson: Yeah, couple of things: there is one obviously, since we exceeded our goal this year, it hit $154 million and we effectively started at zero. That means by the end of the year you have to be close to $300 million. And so we continue to ramp that, that’s why we get the objectives and the goals for next year that we have pretty good visibility on.

With respect to generics, our team who’s leading it, Jeff Berkowitz and John Donovan made a tremendous amount of progress. I think we’re not going to get too much detail on it, because I think it’s work that’s probably making this happening as we speak. But I would say that I think they are working with likely specifics to find really win-win relationships where we can bring a lot more business combined with the players and help them and they can help us. And so we are very confident that we are going to create lot of value there over time, but I’ll just leave it at that. (source)

A few observations:
HOW DID WBAD GET ITS NAME?

The video below was leaked to me by sources deep within WBAD’s secret Bern mountain compound. It shows two Walgreens executives preparing to negotiate with generic manufacturers. Click here if you can’t see the video. (Warning: NSFW language.)