Tuesday’s article—Surprise? CMS Computes and Publishes Pharmacy Prescription Profit Margins—generated a lot of email about the new National Average Retail Prices (NARP) and National Drug Acquisition Cost (NADAC) data sets. In particular, the data table showed average gross profit dollars (NARP minus NADAC) that were lower for generic prescriptions ($9.27) vs. brand-name prescriptions ($11.98). This result seems counter to everything that we all think we know about pharmacy margins.

The apparent discrepancy is resolved by comparing profit levels of  newly-launched generics vs. more-common older generics. Below, I discuss the following:
The generic lifecycle profit framework also highlights the generic wave’s importance for pharmacies. As long as new generics are launching, life is grand. Once the wave peters out in 2016, margin pressure will be brutal for the retail pharmacy industry.

Pharmacy profitability from a generic drug varies over its lifecycle. Consider three time periods after a brand-name drug loses patent protection:
The chart below illustrates the estimated gross profit dollars per prescription earned by a pharmacy in each of these periods. As always, YMMV, because the path for any individual drug can vary significantly from the average. 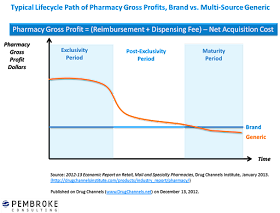 The story is similar for wholesaler profits, as I explain in the 2012-13 Economic Report on Pharmaceutical Wholesalers, starting on page 39.


National Average Retail Price (NARP) minus National Drug Acquisition Cost (NADAC).
The table below shows the unadjusted gross profit for 2011’s biggest brands and their therapeutically equivalent generic version: Lipitor (brand) vs. atorvastatin (generic), and Plavix (brand) vs. clopidogrel (generic). In May, both Plavix and Lipitor moved into the post-exclusivity period. 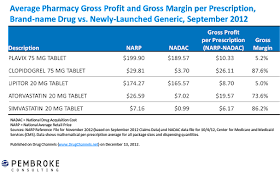 Observations:
By comparison, many older generics are so inexpensive that gross profit dollars are fairly low. In fact, 7 of the 10 most widely-dispensed generic drugs have average prescription prices below $10. The preponderance of these drugs drove the unexpected results in Tuesday’s article.

For instance, the average per-prescription price of simvastatin was only $7.16 and yielded gross profits of $6.17. Even at an 86.2% gross margin, the absolute dollars are low. Pharmacies can still earn acceptable Return on Assets from generic prescriptions because inventory costs also decline sharply.

If you’re still curious, I’ll have more details in the forthcoming 2012-13 Economic Report on Retail, Mail and Specialty Pharmacies.  Coming in January!