Nobody expected this CMS inquisition. They didn't wait very long to follow through on the implied visibility to pharmacies’ prescription economics, as I predicted in Transparency is Here! CMS Exposes Pharmacy Prescription Profit Margins.

Below, I summarize the new gross profit and margin computations based on NADAC and NARP data, along with adjusted numbers that account for the acquisition cost survey’s flaws. Highlights:
Perhaps we shouldn't be surprised. After all, CMS’ chief weapon is surprise and fear. No, wait, their two weapons are fear, surprise, and ruthless efficiency. No, no, their *three* weapons are...Wait, I'll start again...

I view the NADAC data to be much less reliable than the NARP data.

The NADAC methodology calls for a random monthly sample of approximately 2,000-2,500 chain and independent pharmacies, or about 3-4% of total locations. Last week, M&S disclosed that they are receiving 600-800 surveys per month, which is about a 30% response rate. This response rate implies that the NADAC data are based on 1% of pharmacy locations. You can read more of my NADAC critique in Government Boldly Launches a Deeply-Flawed Survey of Pharmacy Acquisition Costs—the top-rated Drug Channels article, according to Star Trek fans.

In the tables below, I adjust the NADAC data to account for estimated off-invoice discounts, rebates, or price concessions received by pharmacies. Such amounts could include volume-based rebates from wholesalers, buying groups, or manufacturers. I estimate these discounts to average about 4% for brand drugs and 10% for generic drugs. Please email me if you have better information.

Unlike the sample computations that I show in Transparency is Here! CMS Exposes Pharmacy Prescription Profit Margins, M&S has access to the raw data and can compute appropriate overall margins.

As a reminder, gross profit equals the revenues received by a pharmacy minus the costs of products (net of discounts and returns) bought from a manufacturer or a wholesaler. For a single prescription, these revenues include the amounts paid for drug ingredient costs, customer copayments or coinsurance, and dispensing fees. Gross margin expresses gross profit as a percentage of revenues. Gross profit measures the portion of a pharmacy's revenues available for the operating expenses and operating profit of a pharmacy. Myers and Stauffer compute Gross Profit as the difference between NARP and NADAC.

Based on the overall averages presented on page 67 of the M&S deck, I compute the overall generic dispensing rate (GDR) to be 77.4%. Taking into account the brand/generic mix, the overall average gross profit and margin figures are:
The adjusted figure looks pretty reasonable. For comparison, the latest NCPA Digest reports that an independent pharmacy’s average gross profit dollars per prescription were $12.40 in 2011. See Pharmacy Ownership: Getting Less Profitable.

These averages vary dramatically by payer and prescription type. The exhibit below shows the per-prescription gross profit and margin for brand-name and generic prescriptions. I include both the raw M&S figures as well as my adjusted estimates. 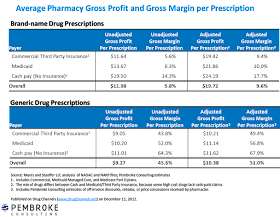