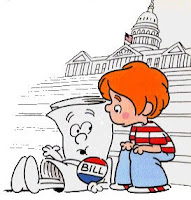 Today’s lesson: If at first you don’t succeed, change the rules!

Just to be crystal clear: Don’t stop planning for January 1, 2009. Obviously, there can be no guarantee that either the proposed legislation will pass or that the Board of Pharmacy will vote for a delay to 2011. Nevertheless, the likelihood of a delay or phased implementation just went up again.

You can read the text of the proposed bills at these links:

SB1270 is more interesting of the two because it potentially changes the January 1, 2009, implementation date. The text looks like a placeholder to me:

“This bill would instead impose the pedigree requirement and the prohibition against selling, trading, transferring, or acquiring a dangerous drug without a pedigree on an unspecified date, authorize the board to extend the compliance date to an unspecified date in those specified circumstances, and make conforming changes.” (emphasis added)

Right now, the CA Board of Pharmacy only has the ability to delay implementation of e-pedigree requirements until 2011 if the board determines that “manufacturers or wholesalers require additional time to implement electronic technology to track the distribution of drugs within the state.” (See CA Pedigree: Going to '11?) Unfortunately, the Board’s decision making process regarding the 2009 deadline seems dysfunctional and unnecessarily opaque, as I describe in Pedigree and Obscenity.

I’ve been told that additional legislation may be on the way, especially with regard to phased implementation such as a risk-based approach to serialization. You can read more about California’s legislative process here.

AND SPEAKING OF SERIALIZATION...

I will be attending SecurePharma2008 on Tuesday morning. If you'll be there, please stop by and see me at the Secure Symbology booth at 10:30 AM on Tuesday. I’m always looking for good story ideas and tips for Drug Channels.

I'll be at the booth with other members of Secure Symbology’s Advisory Board of Directors. But please don’t call us booth babes!
Adam J. Fein, Ph.D. on Monday, February 25, 2008