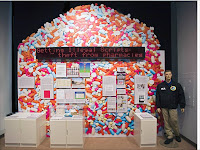 Cardinal Health (CAH) disclosed yesterday that the DEA is now focusing on a fourth Cardinal facility in Stafford, TX. No suspension yet, but the DEA is clearly crawling all over the company, as I predicted two months ago.

Cardinal also announced a number of new actions that suggest (to me) that they are now treating these issues seriously. Nonetheless, I wonder to what extent a corporation should take on monitoring and enforcement activities that are typically the responsibility of state Pharmacy Boards or Health Departments.

According to a 10-Q filed yesterday (available from Cardinal’s Investor page):
“[T]he DEA issued an Order to Show Cause, dated January 30, 2008, pertaining to the license to distribute controlled substances held by the Company’s Stafford, Texas distribution center (the “Stafford Order”). The Stafford Order did not suspend the facility’s license to distribute controlled substances, and no hearing date has been set.”

For non-lawyers, an Order to Show Cause is “is a type of court order that requires one or more of the parties to a case to justify, explain, or prove something to the court. Courts commonly use orders to show cause when the judge needs more information before deciding whether or not to issue an order requested by one of the parties.” (Source: Wikipedia)

So if I understand the legalese correctly, Cardinal has to convince the court *not* to suspend its license to distribute controlled substances from Stafford TX, as the DEA has apparently proposed. However, there is not yet a date for this hearing.

BTW, I don't mean to pick on Cardinal. As I pointed out on Tuesday, McKesson (MCK) may have similar issues and is apparently "negotiating a temporary restriction of its authority to distribute some drugs from a limited number of its distribution centers, in hopes of avoiding a general suspension of a controlled-substance distribution license." (per Cardinal Health: DEA Issues Order For Facility from Dow Jones.)

Cardinal certainly seems to be paying attention to these issues judging by the new activities listed in the 10-Q:

Of course, this list will be familiar to anyone who has read the company’s settlement with the New York State Attorney General’s office in December 2006.

While I am glad to see Cardinal stepping up, I still question whether an unfair burden is being laid on a corporation that never asked to be a police force. Here are a few questions running through my mind:

So, what do you think? Can any of my readers shed some light on the apparently widening problems at Cardinal?