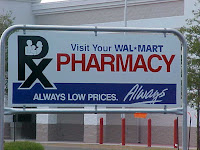 In the absence of specific details from Wal-Mart, I’ll use the economics of today’s pharmacy industry to speculate on Wal-Mart’s possible future direction.

As I explain in this post, Wal-Mart could shake up the retail pharmacy market by offering a low-cost alternative that links the PBM operation to fulfillment at a Wal-Mart pharmacy. Wal-Mart could easily deliver the $100 million in savings cited by CEO Lee Scott without a direct frontal assault on PBMs such as Express Scripts (ESRX) or Medco Health Solutions (MHS) or the big chain pharmacies such as Walgreens (WAG) or Rite-Aid (RAD). I also see a link to a possible future strategy for CVS Caremark (CVS).

Right now, those of us with third-party coverage generally pay an identical co-payment regardless of our pharmacy’s efficiency or cost structure. In my house, we typically choose where to fill a prescription based on whether it’s easier for my wife or me to pick it up.

As a result, chains can blithely tell consumers with insurance to ignore the price of their prescriptions, an argument that seems curiously at odds with the trend toward consumer-driven health care decision making. Check out this Walgreens press release, which was issued when Wal-Mart launched its $4 generics program in 2006. Walgreens (WAG) advises customers to focus on “convenient locations, close-in parking and unique pharmacy services,” but ignore price.

CHOICE IS NOT FREE

As a card-carrying free-market economist, I am now required to inform you that this freedom of choice is not really cost free.

Since I have third-party coverage, I have no incentive to shop at the pharmacy with the lowest cost per prescription. All else equal, I’ll always just go where it’s convenient because my co-pay won’t change.

Yes, you read correctly – the variance in cost was $16 per prescription.

This variation is not surprising (at least to an economist). Put aside the cost of the drug (ingredient cost) for a minute and just think about the operating costs. Pharmacies have high fixed costs relative to the incremental (marginal) costs of dispensing because certain factors are required regardless of volume – a pharmacy license, pharmacists, insurance, rent, etc. In other words, filling the first prescription is very expensive, while filling the second prescription is not. A pharmacy that fills more prescriptions will see average cost per prescription go down, even if marginal cost remains constant.

Basically, both the marginal cost of dispensing and the ingredient costs were relatively low.

I don’t think that Wal-Mart will go after the mainstream PBM business. Instead, they could offer a low-cost alternative that links the PBM operations to fulfillment at a Wal-Mart pharmacy. Such an approach would present a familiar trade-off for the employer:

Note that the price of drugs does not have to change to make the math work here! Wal-Mart’s plan would only need to migrate a small percentage of scripts from pharmacies with higher CODs to Wal-Mart to reach Mr. Scott’s $100 million figure.

Wal-Mart can make this deal because their marginal COD is lower than the average pharmacy. For example, I showed how Wal-Mart makes money from the $4 generic program in Sloppy reporting about Wal-Mart (Dec. 2006) and Wal-Mart's Gain is not Walgreen's Pain (Oct. 2007). I also presume that there will be some processing costs saved because everything is staying within the WMT family.