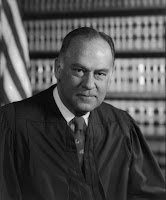 If you’re like me, you probably don’t recognize Potter Stewart, the 92nd Associate Justice of the United States Supreme Court. But I bet you’ll recognize his famous test for obscenity: “I know it when I see it.”

Unfortunately, the California Board of Pharmacy has apparently adopted Justice Stewart’s highly subjective and now-obsolete test as it evaluates the industry’s progress. Therefore, I predict that you can look forward to a Drug Channels post later in 2008 about either: (a) a delay to 2011, or (b) an injunction against the Board of Pharmacy preventing implementation on January 1, 2009.

VENUS & MARS IN THE SUPPLY CHAIN

Although I didn’t attend the Board of Pharmacy meeting on Wednesday, I have heard from a number of the 400-500 (!) people who were there.

The Board members were adamant about the 2009 implementation date and seemed quite frustrated with the messy, real-world problems associated with putting an interoperable system in place.

Representatives from industry – manufacturers, pharmacies, wholesalers, and technology providers – highlighted their ongoing progress and challenges while trying to (politely) remind the Board that life is not as simple as a PowerPoint slide.

And as I predicted on Tuesday, the Board did not vote on delaying implementation until 2011. Perhaps the board members are enjoying their moment in the sun and want it to last a big longer.

QUESTIONS BUT NOT ANSWERS

On Tuesday night, the Board released Questions and Answers relating To the California Electronic Prescription Drug Pedigree Law(s), which claims that their template “outlines criteria the board will apply to any request for a delay in implementation.” (See question 41 on page 11.)

I’ve reread the template at least 10 times, but I still can’t find a list of the criteria that define “evidence.” The Board received at least 35 written responses (discussed in CA Pedigree: Going to '11?) addressing the questions on the template and providing “specific, articulated evidence” (per item 3). Yet at least one of the board members allegedly stated that “none” of the responses were evidence-based!

And how should we interpret the statement that the Board's decision about 2011 will be “an aggregate rather than an individual determination, pertaining to the industry as a whole rather than to the readiness of any individual industry participant.”

Which companies or individuals are included in the “industry as a whole?” How many of them need to talk personally with the Board of Pharmacy? Will the Board delay if 80% of the (undefined) “industry” is ready? What if only 51% are ready? Would you believe 48.7% and a troop of very angry girl scouts?

I guess they’ll know it when they see it. Yikes!

Here are some facts on the California Board of Pharmacy drawn from the Governator’s proposed budget for 2008-2009:

So let me get this straight – the Board of Pharmacy’s budget will increase by 2.5 percent and add no new positions in the fiscal year that it implements e-pedigree?!? (My advice: start selling tickets to the enforcement committee meetings!)

Regular readers will remember that two well-funded, fully staffed Federal agencies were stymied in their attempts to bring drastic change to the pharmaceutical supply chain.

Golly, I wonder what will happen in December 2008? Any lawyers out there who can enlighten me on the legal definition of "arbitrary and capricious"?

In the spirit of full disclosure, I want to let you know that I just joined the Advisory Board of Directors of Secure Symbology, a company that sells a cost-effective solution for unit level serialization of prescription drugs.

Don’t worry – I won’t start selling you stuff. Please feel free to contact me directly if you want to know more about why I chose Secure Symbology.
Adam J. Fein, Ph.D. on Friday, January 25, 2008