Behind the GoodRx-Express Scripts Partnership: How PBMs Profit from Discount Cards in Pharmacy Benefits

Last week, GoodRx announced that it would become the exclusive prescription discount card provider for the commercial beneficiaries of Cigna’s Express Scripts. Links below.

The rise of discount card pricing within pharmacy benefit plans is a positive development. Patients get access to market prices that can  be lower than their PBM’s contracted rate. All out-of-pocket spending with a discount card counts toward a patient's deductibles, and all prescription activity gets captured.

However, I suspect few people understand that placing discount cards within the pharmacy benefit enables a PBM to monetize a new fee stream from the card vendor. Below, I walk through this booming business and highlight some of the conflicts and contradictions underneath the coconuts.

As always, I encourage you to review the original source material for yourself: You may also find it useful to review my previous articles about GoodRx and the discount card business model: https://www.drugchannels.net/search/label/Discount%20Cards.

I place discount cards within the broader context of patient-paid prescriptions in Section 4.3. of DCI’s 2022 Economic Report on U.S. Pharmacies and Pharmacy Benefit Managers.

As I have argued in previous articles, GoodRx and its discount card competitors profit by incentivizing people to bypass their own plan’s out-of-pocket costs and PBM network rates in favor of a different PBM’s rates. This arbitrage reflects multiple factors, including legacy PBM contracted rates that don’t reflect current market pricing, variations between the network pharmacy reimbursements paid by different PBMs, and differences among the rates that a PBM offers to its various clients.

In addition, when used outside of a prescription benefit, a patient’s out-of-pocket costs do not apply to annual insurance deductibles. Yes, plans may allow patients to submit documentation to get this spending counted. But I doubt many people attempt to scale paperwork mountain to cover a relatively small portion of their deductible.

PBMs have recognized that discount cards undermine the perceived value of pharmacy benefit management. Why pay thousands for “insurance” when better prices are available to anyone with a smartphone?

Giving patients access to lower discount card pricing sounds great. Patients can lower their out-of-pocket costs by accessing the network rates of another PBM—or the rates that their plan’s current PBM offers to other plans. What’s more, covered prescriptions get automatically counted toward the patient's deductible. The PBM and plan sponsor also have a complete claims record for each beneficiary, rather than having prescription activity occur outside the benefit.

The latest news: GoodRx announced that starting in 2023, it will become Express Scripts’ exclusive partner in the PBM's Price Assure program. GoodRx will integrate its pricing into the Express Scripts  commercial pharmacy benefit for generic medications. Beneficiaries will automatically get the lowest out-of-pocket cost by comparing the GoodRx price with the price from their Express Script PBM plan. All spending will be applied to any deductible.

“[W]e are especially excited about is a new collaboration with Express Scripts to support them in their mission to make prescription medicines more affordable for their members. Under this innovative program, eligible Express group members will automatically access GoodRx prices as part of their pharmacy benefit. This means an eligible Express Scripts member will have seamless access to GoodRx prices for eligible generic medication in instances where that price is lower than their benefit price. Importantly, this keeps visibility of the eligible members GoodRx claims within the pharmacy benefit, and it enables out-of-pocket claims account order members deductible. [sic]”

As with all things in our crazy drug channel, novel developments inevitably create new financial flows.

To understand what’s happening, recall that discount cards are another form of spread pricing. That’s because the PBM collects a per-prescription fee from the pharmacy whenever a patient uses a discount card program. This fee reflects a spread over the net prescription reimbursement that the pharmacy earns. The PBM then shares a portion of this spread with the discount card vendor that directed the patient to the pharmacy.

I explain and illustrate this transaction flow in The GoodRx-Kroger Blowup: Spread Pricing, Pharmacy Margins, and the Future of Discount Cards.

However, there will be an additional transaction flow back to Express Scripts when GoodRx is utilized within the prescription benefit.

Jailendra Singh, an analyst at Truist Securities, spoke with GoodRx management. He reported that they told him the following:

Neither company would confirm these financial details directly with me.

The chart below illustrates the flow of products and money when a patient uses a discount card to pay the full cost of their generic drug prescription, within their third-party insurance plan. It is adapted from my chart showing the key channel flows within the entire U.S. pharmaceutical distribution, payment, and reimbursement system. In this illustration, PBM #1 provides the discounted rate to GoodRx, and PBM #2 is Express Scripts. 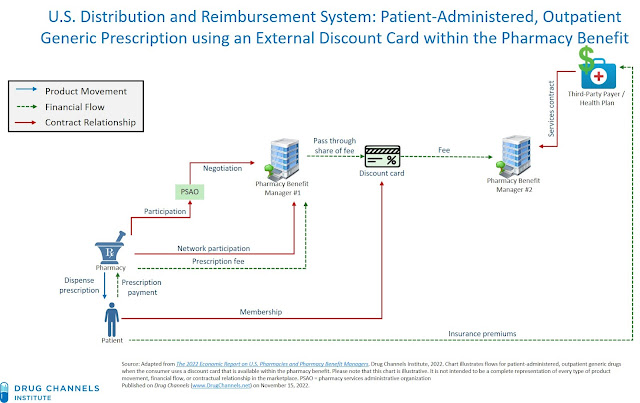 Here’s my translation of how it will work: SHELLING OUT

The complex and opaque financial flows between and among PBMs and discount card vendors continue to flummox me—and should concern pharmacies and plan sponsors.

That's because adding an external discount card into the benefit can allow a PBM to monetize a new fee stream. I doubt many plan sponsors’ contracts contemplate this type of fee, so any discount card-to-PBM funds are fully retained by the PBM.

This complex arrangement raises some intriguing questions: I'm sure you can dream up even more questions.

As I noted in my first article on GoodRx, we should commend the company for helping to lower out-of-pocket costs for consumers. But we should also question whether placing discount cards within PBMs’ benefit plans perpetuate our broken drug pricing model for generic prescriptions.