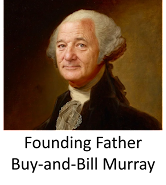 The battle for control of the specialty patient continues.

In 2022, specialty pharmacies—via white, brown, and clear bagging—now constitute a meaningful share of the distribution channels for provider-administered oncology drugs.

However, buy-and-bill appears to have rebounded substantially at hospitals. As I explain below, this resurgence likely reflects the success of vertically-integrated hospital/specialty pharmacy/physician mega-systems against the large insurer/PBM/specialty pharmacy/provider mega-organizations.

Read on for full details and the latest data.

FYI: The material in today’s article is adapted from Chapter 3 of our forthcoming 2022-23 Economic Report on Pharmaceutical Wholesalers and Specialty Distributors, now available to preorder at special introductory pricing.

In the buy-and-bill process, a healthcare provider purchases, stores, and then administers the product to a patient. After the patient receives the drug and any other medical care, the provider submits a claim for reimbursement to a third-party payer. The process is called buy-and-bill because the medical claim is submitted (billed) after the provider purchases (buys) and administers the drug. For a channel flow chart, see Follow the Vial: The Buy-and-Bill System for Distributing and Reimbursing Provider-Administered Outpatient Drugs.

In recent years, third-party payers have become dissatisfied with the buy-and-bill approach for specialty pharmaceuticals covered under a patient’s medical benefit. One major issue: Numerous studies have documented hospitals’ profiteering on provider-administered drugs. I discuss examples here, here, and here.

Third-party payers have therefore permitted or mandated a role for specialty pharmacies in managing and distributing provider-administered specialty drugs. There are three alternative approaches: With any of these approaches, the provider neither purchases the drug nor seeks drug reimbursement from a third-party payer. Instead, the specialty pharmacy adjudicates the claim and collects any copayment or coinsurance from the patient before treatment. However, the provider is still paid for professional services associated with the drug’s administration. Providers are not permitted to bill the third-party payer for drugs, because the pharmacy receives the reimbursement for the drugs sent to the provider.

The chart below illustrates the white bagging process, as a contrast to the buy-and-bill process illustrated in this article. 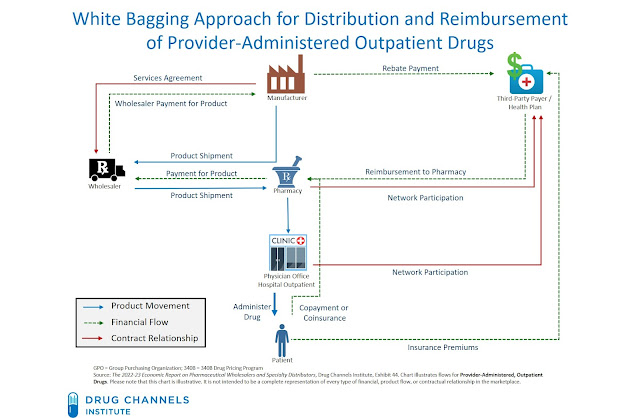 MMIT has again graciously provided us with multiple years of data from its MMIT Oncology Index. For more information about this valuable resource, please contact Jill Brown Kettler (jbrown@aishealth.com). For important information about these data, see the Notes for Nerds below.

For 2022, health plans reported that buy-and-bill remained the most common method of product sourcing for both physician offices and hospital outpatient departments. However, pharmacy channels have displaced buy-and-bill for a meaningful share of provider-administered drugs. In the chart below, pharmacy channels are represented by the orange and green bars. Pharmacy dispensing typically corresponds with pharmacy benefit coverage rather than medical benefit coverage. 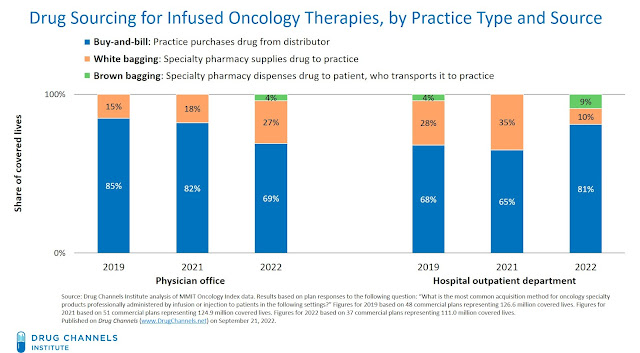 The channel disruption for oncology products varies by practice and therapy type—and has evolved since our 2021 analysis: These results did not reveal whether practices and hospitals are utilizing an in-house specialty pharmacy to source these products. Thus, the data labeled “white bagging” and “brown bagging” may represent a combination of white bagging and clear bagging.

The resurgence of buy-and-bill at hospitals reflects ongoing competition over market access channels.

Meanwhile, payers must confront vertically-integrated hospital/specialty pharmacy/physician mega-systems that dominate geographic markets. Hospitals are also accelerating their acquisition of physician practices and now directly employ a majority of physicians. Hospitals have also become bolder about directing patients to in-house specialty pharmacies, as I show in Fresh Evidence: How Health Systems Steer Prescriptions to Their Own Specialty Pharmacies. And in response to changes in manufacturers’ policies regarding external 340B contract pharmacies, hospitals have ramped up their investments in in-house specialty pharmacy operations.

Hospitals are using their power to push back against payers and slow—or reverse—the growth of white bagging. Last May, the American Hospital Association (AHA) asked the Federal Trade Commission to “increase scrutiny on insurer mandated white bagging policies.” The AHA has also claimed that “white bagging compromises patient safety.”

As I noted last year, hospitals’ opposition boils down to the lost revenues, reduced profits, and higher costs that come with specialty drugs that are white bagged by payer-owned specialty pharmacies.

The latest MMIT data suggest that hospitals are successfully winning this battle. The inflation Reduction Act of 2022 may ultimately give a further boost to hospitals’ efforts by making buy-and-bill much less attractive for physician practices. (See The Inflation Reduction Act: Three Unintended Consequences for Biosimilars, Health Plans, Providers, and Pharmacies.)

For a deep dive into all things buy-and-bill, check out our forthcoming 2022-23 wholesale channel economic report.

The MMIT data are based on health plan survey responses to the following question: “What is the most common acquisition method for oncology specialty products professionally administered by infusion or injection to patients in the following settings?”

These data measure the “most common” sourcing method for provider-administered drugs. The results in the chart above are weighted by health plans’ covered lives. However, these data do not measure the unit quantities or dollar volumes of providers’ purchases by sourcing channel. As far as I know, there are no public data on actual purchases. (If you have such data, please email me.)