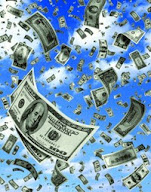 Here’s a summer surprise for fans of the 340B Drug Pricing Program: Drug Channels has just obtained the 2021 figures from the Health Resources and Services Administration (HRSA)! Even better, my Freedom of Information Act (FOIA) request was able to pry out detailed purchases by covered entity type.

The data tell a familiar story. For 2021, discounted purchases under the 340B program reached a record $43.9 billion—an astonishing $5.9 billion (+15.6%) higher than its 2020 counterpart. Hospitals accounted for 87% of these skyrocketing 340B purchases.

What’s more, the difference between list prices and discounted 340B purchases also grew, to $49.7 billion (+$7.0 billion). This figure approximates the money collected by 340B covered entities.

340B advocates have been screaming that “drug companies are cutting 340B,” but the data tell a very different story. Only in the U.S. healthcare system can billions more in payments and spreads be considered a cut.

Read on for full details and analysis, including the opportunity to download your very own copy of the raw data from HRSA.

Apexus, the HRSA-designated Prime Vendor, reports purchases under the 340B Drug Pricing Program to HRSA and oversees most aspects of the program’s management.

For the second year, I had to file an FOIA request to extract these data from HRSA. I have reproduced the document that I received from HRSA below.

Note that the data from Apexus include only indirect sales made via wholesalers. The $43.9 billion figure may be less than the actual total of 340B purchases at discounted prices. That’s because the Apexus data exclude an unknown amount of manufacturer sales made directly to healthcare institutions as well as some sales by specialty distributors.

Here are some other helpful references:

The chart below documents the 340B program's astounding growth. 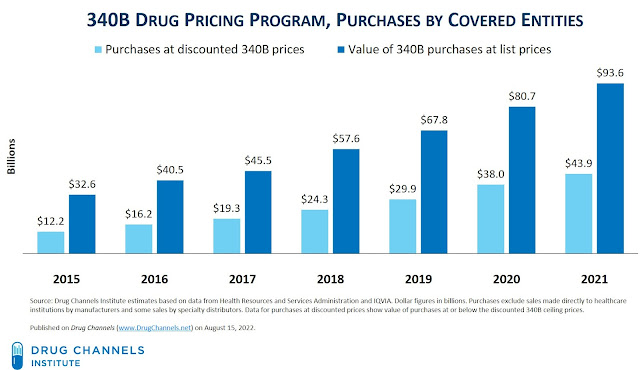 For the first time, HRSA provided me with purchases by 340B covered entity type. The table below summarizes what happened in 2021. 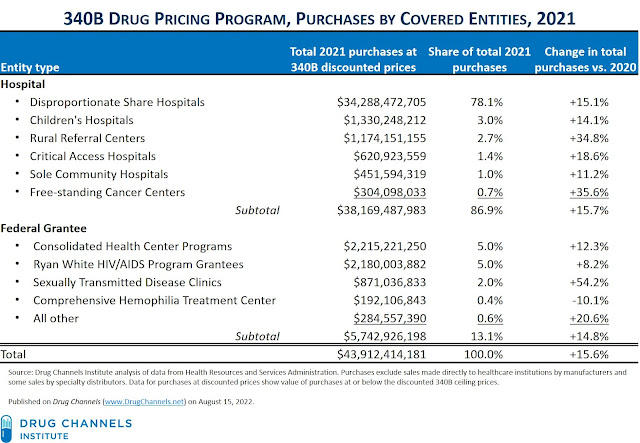 As you can see, nearly every type of covered entity purchased more products at discounted 340B prices in 2021 compared with 2020. What’s more, hospitals were the primary beneficiaries of the 340B program.

A little-known fact: Apexus is owned by Vizient, one the largest hospital group purchasing organizations. That’s right: The federal government outsources operations of a program that primarily benefits hospitals to an organization owned by hospitals.

The 340B Drug Pricing Program is now unambiguously the second-largest government pharmaceutical program, based on net drug spending. But unlike such programs as Medicare Part D and Medicaid, 340B lacks a regulatory infrastructure, well-developed administrative controls, and clear legislation to guide the program.

Congress has just passed the Inflation Reduction Act, which will sharply reduce pharmaceutical manufacturers’ revenues. It’s long past time for legislators to revisit the out-of-control and unregulated 340B program.

In the meantime, the programs’ defenders may want to cool their rhetoric. A while back, lobbying group 340B Health faulted me for exaggerating the size and growth of the 340B program, because “Allegations of ‘explosive 340B growth’ are not supported by the numbers.” Really? More recently, the group launched a website that states: ”Drug companies are cutting hospitals’ access to 340B savings…”

Hmm. 340B Health is entitled to their own opinion, but not their own facts. They will be working extra hard to spin the latest HRSA numbers.

Here is the actual document that I received from HRSA: 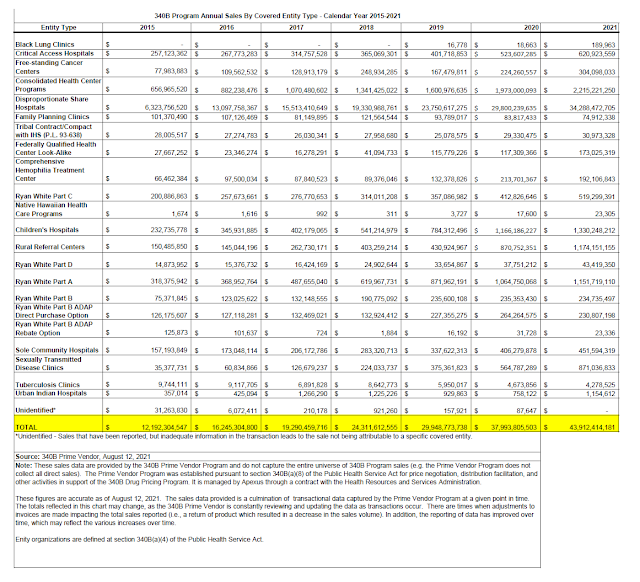 P.S. Two oddities about the document above: