The 340B Noncompliance Data Gap Leaves Drug Manufacturers in the Dark

To learn more, register to receive a copy of Kalderos’ annual report, available April 13, 2022: Conquering the “Great Unknown”: Connecting the data gaps that keep us from knowing the true price of drugs.

Read on for Ashwin’s insights.

In the function of drug discount programs, noncompliant discounts loom large as a threat to program integrity. Since 2020, concerns about noncompliance have led some of the biggest drug manufacturers in the U.S. to take actions to limit contract pharmacy participation in the 340B program, an issue now under consideration by the courts.

Despite the shadow they cast in today’s drug channel, it’s unclear how extensive noncompliant discounts are. Noncompliance is difficult to identify, especially with conventional approaches; the data infrastructure to drive comprehensive understanding has been lacking. We know the issue is material. But no one in the industry has complete data to quantify just how material. 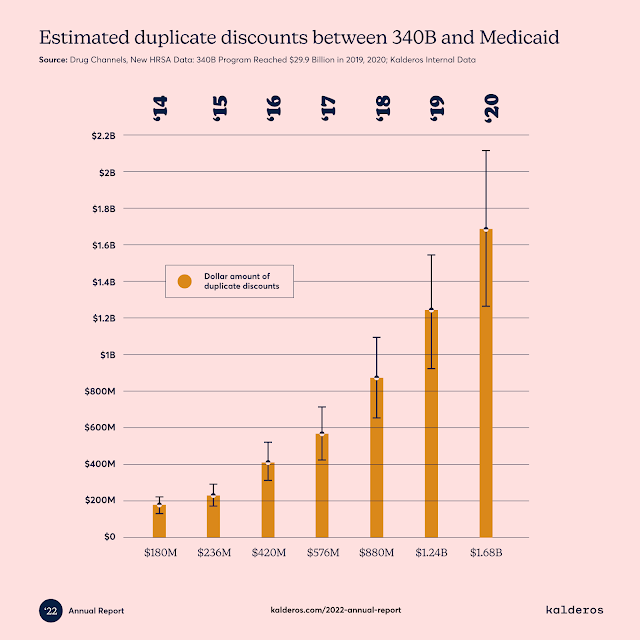 Yet as Kalderos’ platform increases its impact, we’ve been able to get a broader view of the data, analyzing more than $50 billion in Medicaid drug rebates and 340B transactions by the end of 2020 and more than $140 billion by the end of 2021. This has led to some astonishing discoveries, which suggest that noncompliance may be more widespread than stakeholders realize.

One key issue: exposure to noncompliant discounts can vary widely between manufacturers based on a variety of factors. We’ve been surprised by the levels of variability we see in the data; we estimate an uncomfortably wide range of 1% to 20% noncompliance exposure. In some cases, we have been able to lift manufacturer net revenue 2% to 5% by eliminating unlawful discounts.

Manufacturers may not know where they fall in this range because conventional methods of identifying noncompliance typically only identify the low-hanging fruit, with far more noncompliance hidden in the noise. The consequences of this data gap can have drastic implications for revenue recognition and operational decision making.

While previous approaches have left manufacturers in the dark regarding the extent of their noncompliance exposure, Kalderos’ tech-enabled, machine learning-based methods are shining a light into the shadows. We are consistently able to identify considerably more high-risk transactions than clients found through their existing approaches.

Some results we’ve seen from assessments of manufacturer partner data (taking a representative sample across a handful of NDCs and states in order to project potential exposure to noncompliance): 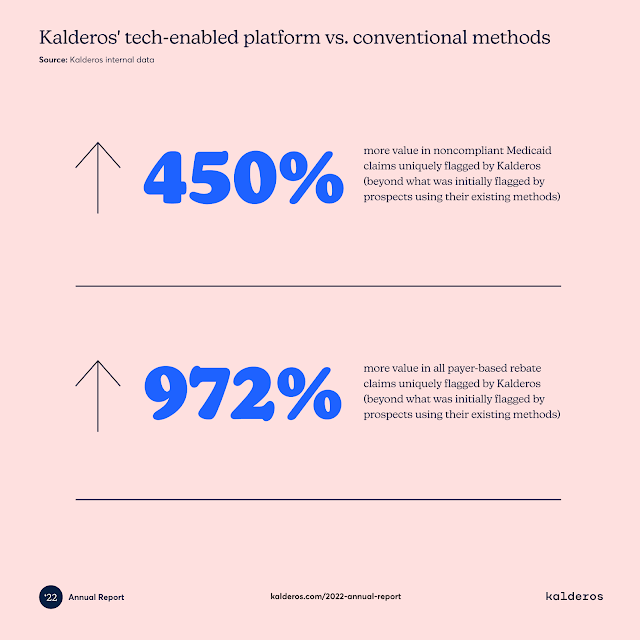 Based on the insights we derive from such assessments, we then project the amount of noncompliance we would expect to discover for that particular manufacturer when their full data is loaded into the platform. As we partner with a growing number of manufacturers, we’ve also seen cases where actual rates of noncompliance significantly outperformed our projections, even by more than 400%.

Such examples suggest that noncompliance is more widespread than previously understood. Disparate teams, disparate manual systems, and siloed approaches to compliance imply a serious problem. But lack of comprehensive industry data makes it challenging to know whether these startling results are a widespread reflection, or outliers. Until the industry at large is able to adopt a more holistic, data-driven approach to Drug Discount Management, we won’t know exactly how deep the problem goes.

In Kalderos’ forthcoming annual report, we delve more deeply into the outstanding data gaps that make it tough to solve drug channel challenges. We call these data gaps the “Great Unknown,” and they impact every stakeholder in the drug channel, patients most of all.

For drug manufacturers, identifying the data gaps is the first step toward resolving them—and addressing the operational challenges they pose. Register today and be among the first to receive a copy of Kalderos’ annual report, available April 13: Conquering the “Great Unknown”: Connecting the data gaps that keep us from knowing the true price of drugs.

Sponsored guest posts are bylined articles that are screened by Drug Channels to ensure a topical relevance to our exclusive audience. These posts do not necessarily reflect our opinions and should not be considered endorsements. To find out how you can publish a guest post on Drug Channels, please contact Paula Fein (paula@DrugChannels.net).