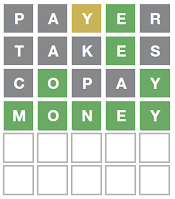 More than four years ago, I warned about the emerging trend of copay accumulators and outlined the costly consequences for patients.

Despite this impressive growth, you may not yet have considered PBMs’ business model for these tools. Below, I outline why PBMs have incentives to prefer maximizer programs over accumulators and alternatives such as specialty carve-out programs.

I look forward to hearing your thoughts on these developments in the comments below or on social media: LinkedIn (preferred) or Twitter.

A pharmaceutical manufacturer can offer copayment offset that covers a beneficiary’s out-of-pocket costs for a brand-name drug. These programs support beneficiaries with commercial insurance. Normally, a manufacturer’s payments from a copay program count toward a patient’s deductible and annual out-of-pocket maximum. Once these annual limits are reached, the plan pays for all subsequent prescriptions.

A few years ago, plan sponsors and PBMs began adopting benefit designs that exclude the value of a manufacturer’s payments from the patient’s annual deductible and out-of-pocket maximum obligations. These approaches alter plans’ traditional approach to copay offset programs.

There are two approaches: Both accumulators and maximizers let payers extract value from the manufacturer’s copay support and benefit from the lower spending that results. These programs generally apply to any drug with a manufacturer copay support program, regardless of therapeutic area. Many of the drugs subject to accumulators are single-source therapies with no equivalent generic version or therapeutic alternative. Accumulator programs therefore have the greatest effect on patients with disease states that are treated with specialty medications. However, some plans apply these programs to both specialty and nonspecialty products.

The chart below illustrates the rapid growth and adoption of accumulators and maximizers. MMIT has graciously provided us with data from its copay accumulator and maximizer research. (I also relied on MMIT’s data for our 2020 analysis.) The 2021 data include 39 managed care plans with 91.4 million commercially insured covered lives. For more information about this valuable resource, please contact Jill Brown Kettler (jbrown@aishealth.com). 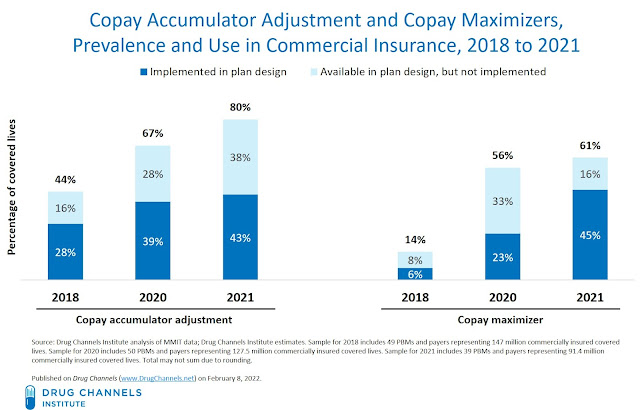 These data highlight the prevalence of these programs:
IMPRESSIVE

Patient issues aside, you may wonder what PBMs think about maximizers or accumulators.

It took me fewer than six tries to think of some reasons why PBMs have incentives to prefer maximizer programs over other plan alternatives for managing specialty costs:
These items are pure speculation. As far as I know, no PBM executive has ever discussed the business benefits of maximizers.

These developments are taking place in the shadow of the so-called Medicaid accumulator rule. After January 2023, the Centers for Medicare & Medicaid Services will require manufacturers to include all patient support funds in the computation of Medicaid best price, unless the manufacturer ensures that the full value of the assistance or benefit is passed on to the consumer or patient. Savor the bureaucratese here.

The Pharmaceutical Research and Manufacturers of America (PhRMA) has filed a lawsuit against the rule.

McKesson recently filed a brief in support of the PhRMA lawsuit. Click here to read the brief. I highly recommend this brief to anyone following this issue. McKesson’s counsel cogently and clearly explains why the rule is “unworkable” and “will harm patients—particularly minorities and those with rare, life-threatening, or complex chronic conditions.” Keep in mind my speculations above when reading the section titled “CMS Expressly Permitted PBMs to Withhold the Very Information that CMS Stressed that Manufacturers Must Obtain from PBMs to Comply with the Accumulator Rule.” Hmm.

As I warned in 2018, accumulators and maximizers encompass many of the worst aspects of our crazy drug channel system, adding troubling complexity to the already convoluted U.S. drug channel.