Five Things to Know About the State of Independent Pharmacy Economics

Our analysis again reveals that despite what you may have heard, many independent pharmacies continue to hang on in a highly challenging retail environment. Prescription profits remained stable, while the average pharmacy owner’s salary jumped for the second year.

Read on for the financial details. The U.S. retail pharmacy industry faces many powerful headwinds. But there are some emerging positive trends, including DIR reform and profits from COVID-19 vaccinations. Expect independents to keep hanging in there.

The digest presents selected 2020 financial and operating data submitted by pharmacy owners. These data have strengths and weaknesses. They do, however, provide the only publicly available, consistently published look at the financial position of independent pharmacies.

NCPA also collects more detailed financials, but it doesn’t share those data with external analysts. Since I don't have access to the complete financial report, some of the figures below are our estimates. However, for the first time, NCPA has graciously shared details on prescription profits. Based on these data, we have made slight restatements to the historical figures that were presented in previous articles.

Here are some basic definitions to clarify the pharmacy profit story: For more on pharmacy and prescription economics, see our annual Economic Report on U.S. Pharmacies and Pharmacy Benefit Managers.

Here are five observations on the latest data:

In 2020, independent pharmacies' overall gross margin from prescription and non-prescription products was 21.9%. That’s comparable to the figures from the previous four years, which ranged from 21.8% to 22.0%.

This year’s findings differ slightly from U.S. government statistics, which show higher overall gross margins at chain and independent drugstores. For 2020, the drugstore industry’s overall average gross margin as reported by the U.S. Census Bureau was 24.4%. (source) The overall industry margin is higher than the independent pharmacy margin because non-prescription front-end products with higher-gross margins account for a greater share of sales at chain drugstores. 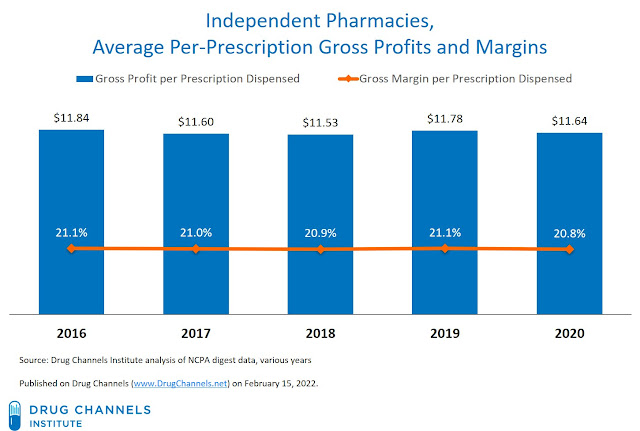 The NCPA digest continues to record an odd discrepancy. For independent pharmacies, the generic dispensing rate (GDR)—the percentage of prescriptions dispensed with a generic drug instead of a branded drug—has lagged that of the overall market.

IQVIA data show that for 2020, the GDR for unbranded generics in the overall market was 88.5%. The NCPA Digest reports that the GDR for independent pharmacies was only 86% for 2020.

The salary gap between a pharmacy owner and an employed pharmacist has become smaller than it once was. However, this gap has expanded over the past few years. For 2020, the average gross base salary for a pharmacist at a retail, mail, long-term care, and specialty pharmacy was about $124,000. See Pharmacist Job Market in 2020: Hospital Employment Up, Retail Salaries Down.

In other words, owning a pharmacy, with all of its hassles and obligations, has again become more remunerative than being an employee.

The NCPA has changed its methodology for counting the total number of independent community pharmacies.

Retail pharmacies are experiencing a period of intense competition that continues to pressure prescription profits. After years of stability, the number of U.S. pharmacy locations across all formats is trending downward. In CVS Pharmacy Downsizes: 10 Industry Trends Driving the Retail Shakeout, I outlined the many powerful headwinds facing retail pharmacy.

There are, however, some tailwinds benefiting pharmacies’ economics: For more than 10 years, I’ve been publishing reviews of independent pharmacies’ economics. My message to pharmacy owners has been simple: Get big, get focused, or get out. If a small pharmacy wants to win in today’s consolidating drug channel, it needs scale or differentiation. Otherwise, cash out gracefully. I continue to believe that many—but surely not all—independent pharmacies will survive.

Finally, a friendly reminder to my independent pharmacy readers: I'm not a magic wizard. I haven't caused these changes. I'm merely reporting on the facts and observing what's going on. Rather than getting hopping mad at me on Twitter, I suggest that you reflect on the business strategies that you will need to survive a highly challenging environment.